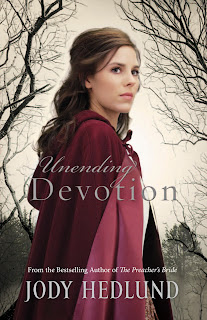 In Her Darkest Hours, Is He the Man She Needs?

Lily Young longs to find her lost sister or will die trying. Heedless of any danger, she searches logging camps and towns, posing as a photographer’s assistant. And then she arrives in Harrison, Michigan–and the sights of Connell McCormick.

Connell is determined to increase the fortune of his lumber-baron father and figures as long as he’s living an upright life, that’s what matters. But when Lily arrives in town she upends his world, forcing him to confront the truth that dangerous men have gained too much power while good men turn a blind eye.

Vexing but persuasive, Lily soon secures Connell’s help, drawing them ever closer to each other. Will standing for what’s right cost them both everything?

Jody Hedlund is the bestselling author of "The Doctor's Lady" and "The Preacher's Bride". She won the 2011 Inspirational Reader's Choice Award, the 2011 Award of Excellence from the Colorado Romance Writers and was a finalist for Best Debut Novel in the 2011 ACFW Carol Awards. Currently she makes her home in central Michigan, with her husband and five busy children. She loves hearing from readers on Facebook and on her blog.

Unending Devotion is a whirlwind of a story with the strongest heroine I have ever encountered!  Lily Young is determined to find her younger sister who has disappeared without a trace.  On her journey she sacrifices her own safety in order to save other young ladies who may have met a similar unsavory fate.  Connell McCormick comes to Lily's assistance when she is in danger- more than once- and she's not sure what to make of him.  In my opinion, Jody Hedlund has outdone herself with Connell McCormick.  A perfect gentleman with a pure heart filled with passion- you'll find yourself swooning!:)  Unending Devotion will have your racing and your blood boiling!  James Carr is the despicable villain that runs The Stockade (house of ill repute)- untouchable and evil.  Could Lily's sister, Daisy, be captured there?  Lily won't stop until she finds out and the truth may cost her her life.  I was racing to the end of the book to find out what happens!   Incredible tale of good versus evil.  I can't wait to read more from Jody Hedlund!

Celebrate with Jody by entering to win a Nikon Camera Prize Pack! See what folks are saying about Unending Devotion!

One “devoted” winner will receive:
Enter today by clicking one of the icons below. But hurry, the giveaway ends on September 17th. Winner will be announced at the “Unending Deovtion” Author Chat Facebook Party on 9/18. Connect with Jody, get a sneak peek of her next book, try your hand at a trivia contest, and chat with readers just like yourself. There will also be gift certificates, books and a Book Club Prize Pack to be won (10 copies for your book club or small group)!
So grab your copy of Unending Devotion and join Jody on the evening of the September 18th for a chance to connect with Jody and make some new friends. (If you haven’t read the book – don’t let that stop you from coming!)

Don't miss a moment of the RSVP today. Tell your friends via FACEBOOK or TWITTER and increase your chances of winning. Hope to see you on the 18th!

Posted by mysteryhistorymom at 9:37 PM

Sounds interesting! It's great to read about unending devotion.

Aw a book about Michigan!! Yay!! LOL How ya doing Lori? Fine I hope! I wish I could read as much as you do. I just can't seem to do it. I use to all the time. Now I just love to create and watch cable!! LOL Take care sweet lady!! XOXO Love, Fran.