Vampyre 2000: No Rest for the Wicked Book Review 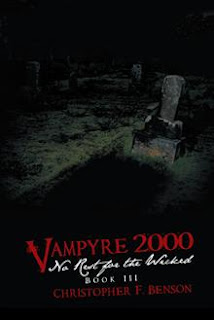 Dracula, The Lost Boys, Twilight- I've always been intrigued by vampires.  When given the opportunity to review Vampyre 2000: No Rest for the Wicked, I was eager to take a walk on the wild side.  I found the main character, Cornelius, to be quite fascinating.  Born in Africa in the 1800's, he is "turned" into a vampire while shackled on a boat by slave traders.  And that's just the beginning.  In this third book in the series, we meet Eloise, the lady that saved Cornelius all those years ago when he washed up on a beach and Kisasi, a pretty young freed slave.  A deadly love triangle forms and tragedy soon follows.  Fast forward to present day and a "Vampire Killer" is terrorizing Massachusetts.  Cornelius feels compelled to rectify this "situation" and a road trip like no other occurs.  Needless to say, there's never a dull moment!   Christopher Benson allows us to follow Cornelius over 200 years to present day. The flashbacks in time shown through snippets of memories are my favorite parts of the book and what makes the story truly unique.  Vampyre 2000: No Rest for the Wicked is quite exciting and unlike anything I've ever read before but please note that it's not for the faint of heart.  Blood, gore and adult situations all play a part in this thrilling journey, but no self-respecting vampire would be caught dead without them.;)


Breathing New Life into the Undead
Sometimes the afterlife isn’t happily ever after, a realistic look at a fantastical legend

Idaho Falls— It’s the 1800s and Cornelius has been captured in the slave trade. Devastated at the loss of his family and home, Cornelius’s life is about to take a turn for the worse—with him on the ship is a vampire.
Drained and left for dead in the Atlantic, Cornelius drifts to the shores of New England where he quickly realizes there are some things worse than being a slave, like turning into a blood-sucking killer.  In the Vampyre 2000 series, Idaho author Chris Benson follows the saga of Cornelius as he struggles to accept his altered life, find love, and outwit an old enemy. With three books out so far, (Life to Lifeless, Ill of the Dead, and No Rest for the Wicked), Benson’s captivating world is garnering an eager audience.
200 years pass and Cornelius is still struggling with the ramifications of being turned. As he evolved from a frightened neophyte, Cornelius also grew weary of the violence and lonely isolation forced upon him. But his existence finally gained meaning when Rita Alderwood walked into his life. Drawn to her nubile charm, Cornelius fights to protect her from his enemies and himself. But his ultimate failure leads to an unbearable choice. Let Rita die or condemn her to a life of the undead. Unable to live without her, Cornelius selfishly turns her.
Finally joined with the love of his life, Cornelius may yet be able to live in peace, if only Rita can accept the monster she has become. There is no glistening skin or drinking animal blood in Benson’s viciously crafted world. Inspired by the fantasies of H.G Wells, Anne McCaffrey and Terry Brooks, Benson returns to gruesome but realistic consequences of the classic vampire legends. When vampires drink, they kill. They lead a dark and isolated existence, and that lifestyle may be too much for Rita. But before she can come to turns with the consequences of her new life, the choice may be taken from her when Cornelius’s oldest nemesis returns to exact her revenge.
If you’re ready for a return to the classic legends with a twist, then Vampyre 2000 is the breath of fresh air you’ve been looking for in an overly saturated genre. Riveting characters, indelible stories, and ruthless determination all cap off an engaging and long-desired series. Cornelius’s unique origin story is just one aspect of the novelty of Benson’s work.

About the Author
Christopher F. Benson grew up in Idaho Falls, Idaho. He has always had a fascination with vampire stories and folklore, and was an avid reader of science fiction and fantasy as a child. Benson studied architecture and history at Texas Tech University and also acted extensively, including performing in several Shakespearean plays. After graduating from college, he began working as an architectural designer in San Franciscoand San Antonio. In 2004, he began keeping his ideas for a modern vampire story in a writing journal, and in 2008, he began to write Vampyre 2000: Life to the Lifeless.


*I was given a copy of this book from PR by the Book in exchange for an honest review.  No other compensation was received.*
Posted by mysteryhistorymom at 10:11 PM