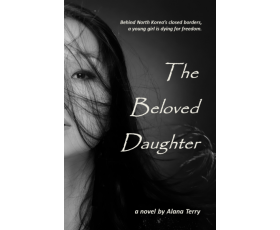 The Beloved Daughter, by Alana Terry, opened my eyes, broke my heart and changed my life.  It's the story of Song Chung-Cha, a 12 year old girl, held captive in a North Korean prison camp to suffer for the crimes of her father.  Is he guilty?  Yes.

His crime?  Being a Christian.

I promise you, guarantee you, that Chung-Cha's story will grab hold of you from the first page- and it will not let go until the last page.  Being punished- even killed- for loving the Lord.  It's hard to even comprehend.  While reading The Beloved Daughter, I found my mind racing at the diabolical acts of the prison guards and the sheer hate that flowed through their veins.  The story affected me throughout the day as I pondered the plight of North Koreans.  I started to pray for these precious people that are starving and living in fear.  Many have never even seen a Bible.  They are now a part of me.  Yet, flickers of hope are present through the story empowering Chung-Cha.  So often she's only able to endure through God's love.  The words will anger you, sadden you, hopefully motivate you but ultimately they will make you take a good, hard look at yourself.  Chung-Cha is a fictional character but her struggle is happening today and it's real.  How blessed we are to be Christians in America!  It's a true privilege, but we must try and help others who are not so fortunate.

Before receiving the book, I asked Alana Terry if I could read it with my daughter's, ages 10 and 15.  Her answer was, "No, I wouldn't recommend it."  And this is why.  The scenes in this story are hard to read.  They will haunt you and make you cry.  But, they are words that need to be said.  Like the Holocaust, you can't candy coat this story.  It's a message of hope, but there's way too much violence for younger eyes to read.  Alana Terry has done an amazing job of shining a light into a part of life I knew nothing about.  I'm richer for having read her book and highly recommend that you read it, too.

More about The Beloved Daughter:

In a small North Korean village, a young girl struggles to survive. Catastrophic floods have ravaged her countryside. But it is her father’s faith, not the famine of North Hamyong Province, that most threatens Chung-Cha’s well-being.
Is Chung-Cha’s father right to be such a vocal believer? Or is he a fool to bring danger on the head of his only daughter?
Chung-Cha is only a girl of twelve and is too young to answer such questions. Yet she is not too young to face a life of imprisonment and forced labor. Her crime? Being the daughter of a political dissident.
“The Beloved Daughter” follows Chung-Cha into one of the most notorious prison camps of the contemporary free world. Will Chung-Cha survive the horrors of Camp 22?
And if she does survive, will her faith remain intact? A winner in the 2012 Women of Faith writing contest.

The Beloved Daughter won Second place in the Women of Faith writing contest in April 2013.  $5 from every direct purchase (through her website) will sponsor 1 Bible, to be sent to a restricted nation via Voice of the Martyrs Bibles Unbound Program.

Alana Terry is a homeschooling (hurrah!) mom of 3 (first grade and younger).  She's a mother of a special-needs (tube-fed) son.  Alana's also the author of A Boy Named Silas, which is a memoir about her son's medical condition, and What, No Sushi (book 1 in a time-travel fiction series for homeschoolers published by Do Right Life).

*I was given a copy of The Beloved Daughter in exchange for my honest opinion.  No other compensation was received.  Thank you, Alana.  It was an absolute privilege.*
Posted by mysteryhistorymom at 11:52 PM

Thank you so much for the kind review!

This will definately be going on my list of books to read! I love reading your book reviews Lori! You do a very good job at it! Hope you are having a wonderful first day of summer....Hugs from me to you!!

Alana- It was my pleasure! Thank you so much for the invitation! I can't wait for our interview!;) Lori

Jerelene- Thank you so much, dear friend! I know you will be incredibly blessed by this book! Lori