A Heartbeat Away by S. Dionne Moore 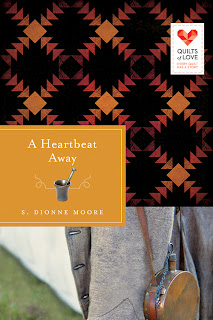 A Heartbeat Away is a historical novel filled with plenty of drama, action, emotion and romance.  It takes place during the Civil War when two brothers venture out to fight for what they believe in.  One of the brothers, Joe, becomes badly wounded but is rescued and brought to Beth Bumgartner and her grandmother.  They tend to his wounds and a friendship is kindled among the chaos, fear and gunshots.  But where is Joe's brother?

S. Dionne Moore definitely captured the emotions and passion of war in A Heartbeat Away.  She doesn't candy coat the brutality and desperation felt by those caught in the midst of battle.  The words are often raw and occasionally difficult to read, yet the author is true to her characters and storyline.  Runaway slaves, families desperately fleeing the enemy, badly wounded soldiers (often covered with lice) and gun shots occurring during the day and night all paint a tragic but realistic portrait of the Civil War.  The two shining stars are Beth and her grandmother, Gerta, who do everything in their power to help the wounded and the hungry.  Throughout the pages of this book there are bright moments captured through memories shared and the comfort of kind words and actions.  A Heartbeat Away is bittersweet, as any well written story of the Civil War should be.  History lovers that appreciate a touch of romance will enjoy this book.

When a band of runaway slaves brings Union-loyal Beth Bumgartner a wounded Confederate soldier named Joe, it is the catalyst that pushes her to defy her pacifist parents and become a nurse during the Battle of Antietam.
Her mother's mysterious goodbye gift is filled with quilt blocks that bring comfort to Beth during the hard days and lonely nights, but as she sews each block, she realizes there is a hidden message of faith within the pattern that encourages and sustains her. Reunited with Joe, Beth learns his secret and puts the quilt's message to its greatest test---but can betrayal be forgiven? 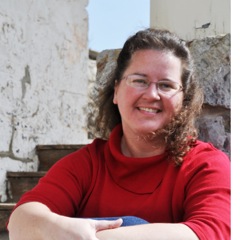 Posted by mysteryhistorymom at 11:34 PM