Gather your Family Together for A Big Year for Lily! 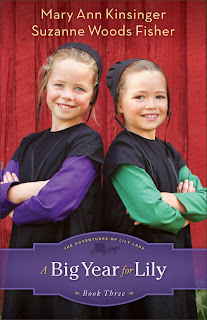 My 10 year old daughter and I adore Lily Lapp.  In fact, we savor each and every page of her adventures- she's almost like a member of our family!  Remember the Little House on the Prairie books?  Well, sweet Lily is a modern day, Amish version of Laura.  As you read her story you'll giggle with Lily and often your heart will go out to her.  She tries so hard and yet sometimes life just isn't fair!  Aaron Yoder is a constant menace and Effie Kauffman may even rival Nellie Olson for bully of the year!  A Big Year for Lily is perfectly delightful and wonderful for family reading time.  You may even find yourself sneaking a few pages ahead.:)   A Big Year for Lily is Book 3 in the series (Book 1- Life with Lily and Book 2- A New Home for Lily) written by Mary Ann Kinsinger and Suzanne Woods Fisher.

It's hard to pick my favorite stories in this book but let me try- without giving too much away.:)

#1-The mystery of the mixed up lunches made my blood boil!  How could anyone accuse Lily of stealing??
#2-Bats!  In Lily's bedroom?!  Can you even imagine?
#3-We had such a giggle when Lily tried her first ice cream cone.:)  Ah, the precious innocence of a child.


About A Big Year for Lily:
Book Three in the Adventures of Lily Lapp series. Co-written with Mary Kinsinger.
Lily Lapp's family has settled into their new home in Pennsylvania, but life still holds big changes and big steps for Lily. Good changes, like once again living close to her beloved cousin and best friend, Hannah. Bad changes, like a mean girl who plays tricks on her. And no change at all where Lily would most want one--Aaron Yoder sits near her in school and relentlessly teases her. Surprises are in store for Lily as she learns, with Mama and Papa's help, to manage the ups and downs of growing up Amish.
The third of four charming novels that chronicle the gentle way of the Amish through the eyes of a young girl, A Big Year for Lily gives children ages 8-12 a fascinating glimpse into the life of the Amish---and lots of fun and laughter along the way. It combines Mary Ann Kinsinger's real-life stories of growing up Amish and the bestselling writing of Amish fiction and nonfiction author Suzanne Woods Fisher. With charming line drawings in each book, this series captures the hearts of readers young and old.

Meet Suzanne:
Suzanne Woods Fisher is the bestselling author of the Lancaster County Secrets series and the Stoney Ridge Seasons series, as well as nonfiction books about the Amish, includingAmish Peace. She is also the coauthor of a new Amish children's series, The Adventures of Lily Lapp. Her interest in the Anabaptist cultures can be directly traced to her grandfather, who was raised in the Old Order German Baptist Brethren Church in Franklin County, Pennsylvania. Suzanne is a Carol Award winner and a Christy Award finalist. She is a columnist for Christian Post and Cooking & Such magazines. She lives in California. For more information, please visitsuzannewoodsfisher.com and connect with her on Twitter @suzannewfisher. Get Amish proverbs delivered right to your iPhone or iPad! Download the Free App!http://bit.ly/134r55G
Learn more about Lily athttp://adventuresoflilylapp.com/

Suzanne Woods Fisher is celebrating the release of A Big Year for Lily, book three in the beloved Adventures of Lily Lapp series, with a giveaway extravaganza!


Enter today by clicking one of the icons below. But hurry, the giveaway ends on July 27th. All winners will be announced July 29th at Suzanne's blog.

Don't miss a moment of the fun; enter today and be sure to visit Suzanne's blog on the 29th to see if you won one of the fun prizes! (Or better yet, subscribe to her blog and have the winner announcement delivered to your inbox!)

*I was given a copy of A Big Year for Lily from Litfuse Publications in exchange for my honest opinion.  No other compensation was received.*
Posted by mysteryhistorymom at 6:22 PM

oh my goodness! I have totally added those to my amazon list for T-A when she is bigger :) I hope we can read those out loud together :)