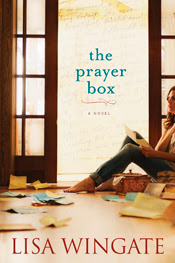 "There are all different kinds of sisters, Tandi.  Not just the ones you're born with."

The Prayer Box is an emotionally riveting combination of Steel Magnolias, Sleeping with the Enemy and The Help.  Through a collection of hidden letters, the inspirational message is one of forgiveness, hope and new beginnings.  Tandi Jo Reese (along with her two children, Zoey and J.T.) is on the run from an abusive husband.  She finds a temporary haven in Iola Anna Poole's rented cottage on Hatteras Island but soon after that the elderly woman passes away.  Tandi has no idea or direction until she discovers 81 decorated prayer boxes hidden in a closet.  The boxes are filled with amazing history and a life story that will change Tandi Jo Reese forever.

It took me awhile to get into this book but I'm so, so happy that I did.  The Prayer Box is one of those stories that you wish would be made into a movie.  The lives of Tandi Jo and Iola Anne are ones of hardship and sadness but that's what shapes them into such incredibly strong and loving women.  I adored Iola Anne.  She called upon the Lord through her letters and asked what she could do for others, not what they could do for her.  Misunderstood by many, she endured even when people judged her and looked down on her.  She was full of grace, but only through the Lord.  I don't want to tell you what she did exactly, as that would ruin the surprise for you, but my goodness, she has a story to tell!  (BTW, I'd cast Viola Davis as Iola Anne.)

On to Tandi Jo.  She's a bit harder to love- at first.  She appears to be self-centered and not quite the most nurturing mother, if you know what I mean.  But as her story unfolds, you'll see where she's come from and will marvel at how far she's managed to get in life.  The loving people she meets on Hatteras Island (adored the Seashell Shop sisters!) save her, in a sense.  Her kindred spirit friend, Iola Anne, helps set her straight on life's journey through the prayer box letters.  It was truly a joy to watch Tandi's transformation.  (I'd cast Kristen Stewart as Tandi Jo.)

Some of my favorite parts were:
#1- Iola Anne's letters
#2- Tandi's memories of her grandfather
#3- Tandi's adventures with the cat ;)
#4- The Seashell Shop sisters
#5- "Hawaiian shirt" Paul :)
#6- The surprise ending!

Back Cover:
When Iola Anne Poole, an old-timer on Hatteras Island, passes away in her bed at ninety-one, the struggling young mother in her rental cottage, Tandi Jo Reese, finds herself charged with the task of cleaning out Iola’s rambling Victorian house.
Running from a messy, dangerous past, Tandi never expects to find more than a temporary hiding place within Iola’s walls, but everything changes with the discovery of eighty-one carefully decorated prayer boxes, one for each year, spanning from Iola’s youth to her last days. Hidden in the boxes is the story of a lifetime, written on random bits of paper--the hopes and wishes, fears and thoughts of an unassuming but complex woman passing through the seasons of an extraordinary, unsung life filled with journeys of faith, observations on love, and one final lesson that could change everything for Tandi.

*I was given this book from Tyndale in exchange for my honest opinion.  No other compensation was received.*


Posted by mysteryhistorymom at 12:50 AM