Only With Blood by Therese Down- A Story of Ireland 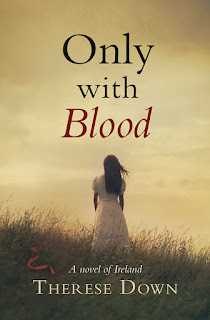 Only With Blood is riveting and heart breaking. At times the harshness takes your breath away but then tender moments steal in and warm your soul. This incredible story is filled with extraordinary people living life the best that they know how in a country where struggle is an everyday occurrence and dreams are a luxury afforded to very few.

Jack Flynn is 43 years old and to say that his life has been harsh is an understatement. His mother left him at a tender age (never to return) with his abusive father and this harsh reality  left Jack with built up anger and a sour countenance. Suffering terribly with tuberculosis, unanswered questions and guilt from the past, Jack wishes to marry before it's too late. He sets his sites on the beautiful, fiery, 17 year old, Caitlin Spillane. Caitlin's one wish is to go to university but her father has other plans and selfish motives of his own...

Thus begins Only with Blood. Read one page and you won't be able to out this book down! I believe I forgot to mention one other character, the dashing, handsome (and young!) Donal! He also has his eye on the lovely Caitlin. Donal is educated, clever and capable- but sadly, also has ties to the IRA.

I never knew what was going to happen in this book- and I relished every second of guessing. Texting my 17 year old updates as I read (she was out with a friend) because she also wanted to know what was happening in the story! Survival, secrets, compassion, justice, forgiveness, and history are all here. This isn't a fluffy book. The story is raw and beautiful. The words will stay with you long after you read the last page. Thank you for this masterpiece, Therese Down!

When dying Jack Flynn decides he needs a bride so that he can father a son, his young wife Caitlin proves far more than he intended to buy.
Jack Flynn, strong and aggressive but slowly dying of tuberculosis on his farm in Tipperary in the Republic of Ireland, decides to acquire--purchase--a young wife who can bear him sons to inherit his family's land. His choice, Caitlin Spillane, is less than half his age, attractive and intelligent, and resents bitterly the obedience that is forced upon her.
When a young firebrand, a supporter of the IRA, arrives in the village, he and Caitlin are drawn together in their detestation of Flynn. Flynn, traumatized by his own insurgent IRA experiences twenty years earlier, is secretly convinced that Eamonn de Valera's more diplomatic, peaceful approach to Ireland's problems is the only sane one.
Could Caitlin be won for the cause, and leave her unloved husband?
A novel set against the struggle for the heart of Ireland in the Second World War, when the IRA notoriously sought assistance from the Nazis, Only with Blood explores flawed characters placed in extraordinary situations. - See more at: http://www.kregel.com/fiction/only-with-blood/#sthash.gDHkO1eX.dpuf

*I was given this incredible book from Kregel in exchange for my honest opinion. No other compensation was received.*
Posted by mysteryhistorymom at 6:30 PM