Stones for Bread by Christa Parrish- A journey to find God, survive loss and craft bread 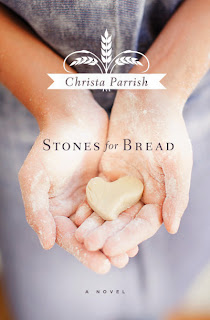 Stones for Bread is an up close and personal encounter with a shattered little girl- who has grown up to be a driven, but troubled, woman.  Liesl McNamara longs to understand God, forgive her mother (who struggled with depression), love herself as well as create masterful bread.  She's succeeding in the bread department as it's the one thing she truly has control over.   Flashbacks woven through the story reveal Liesl's past- both the joy and the tragedy.

The characters in Stones for Bread are quirky, full of personality and oh so easy to love.  Through their eyes I grew to love Liesl, despite her reluctance to become attached to people.  (We learn why she's this way as the story unfolds and we ache for her.)  Seamus, the delivery man, and his daughter Cecelia are like shining stars in a dark night- patiently waiting to guide Liesl.  Precious.  The relationship between Xavier, the head baker, and his grandson Jude is beautiful, pure and simple.  Tee, the brash cook, is delightfully rough around the edges.  Under her crusty exterior is a person looking out for the wounded- a secret hero.

Stones for Bread is filled with memories, family secrets, a cooking show adventure, tragedies and victories.  There's also love, forgiveness, kindness and bread recipes!  A wonderful book to snuggle up with (and cook with!) over the holidays.

About the book: A solitary artisan. A legacy of bread-baking. And one secret that could collapse her entire identity.

Liesl McNamara's life can be described in one word: bread. From her earliest memory, her mother and grandmother passed down the mystery of baking and the importance of this deceptively simple food. And now, as the owner of Wild Rise bake house, Liesl spends every day up to her elbows in dough, nourishing and perfecting her craft.

But the simple life she has cultivated is becoming quite complicated. Her head baker brings his troubled grandson into the bakeshop as an apprentice. Her waitress submits her recipes to a popular cable cooking show. And the man who delivers her flour --- a single father with strange culinary habits --- seems determined to win Liesl's affection.

When Wild Rise is featured on television, her quiet existence appears a thing of the past. And then a phone call from a woman claiming to be her half-sister forces Liesl to confront long-hidden secrets in her family's past. With her precious heritage crumbling around her, the baker must make a choice: allow herself to be buried in detachment and remorse, or take a leap of faith into a new life.

Meet the author: Christa Parrish is the award-winning author of three novels, including the 2009 ECPA Fiction Book of the Year Watch Over Me. When she's not writing, she's a homeschool mother of three wonderful children. Married to author and pastor Chris Coppernoll, Christa serves with him as co-leader of their church's youth ministry as well as serving as a facilitator for a divorce recovery ministry. She is now also slightly obsessed with the art of baking bread.

Learn more about Christa at: http://christaparrish.com


Christa Parrish is celebrating her fourth novel, Stones for Bread, with a KitchenAid Mixer giveaway.

2. Then Pin the Stones for Bread book cover (below), the contest graphic (above), or both, and link to this post (using this URL: #StonesforBread KitchenAid Mixer Contest #ChristaParrish http://litfusegroup.com/campaigns/stones-for-bread-by-christa-parrish).

3. Then fill out THIS SHORT FORM to let us know. (There are also some additional ways to earn extra entries, as well as an option for non-Pinterest users. It's true—people like that do exist!)

Winner will be announced on 12/9 on Christa's Facebook Page.

*I was given a copy of this book by Litfuse in exchange for my honest opinion.  No other compensation was received.*
Posted by mysteryhistorymom at 11:44 PM

wow! that sounds like an amazing read, thanks for sharing!