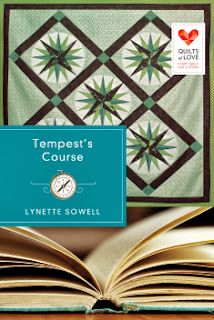 A hidden diary, an antique Mariner's Compass quilt, and an elderly gentleman with a mysterious agenda.  Tempest's Course is like an ancient treasure chest.  It opens slowly, teasing readers with a glimpse of what's to come.  Kelly Frost has been hired to restore an antique quilt at Gray House, an old whaling captain's home.  Well, mansion is more like it.  While living alone in Gray House she discovers Mary Gray's diary, over 100 years old.  The words written inside are fascinating but also quite tragic...
Tempest's Course, written by Lynette Sowell, is a pleasing historical romance where not all is as it seems.  My favorite character was 102 year old Jonas Plummer.  Hard headed, crusty Jonas Plummer was a delightfully crafted curmudgeon.  He gave life and incredible purpose to the book.  Have a look...

"Best not to talk about it now, not with the reporter here,"  Mr. Plummer tightened his trip on the rolling walker and continued his shuffle.  "One thing I've learned, you don't have to share everything you know. Not until the right time, anyway."
"I see." She moved ahead of him to open the pocket door to the ballroom a little wider.
"Are you sure you see?  I'll share this with you."  He glanced toward Megan, who was typing on her phone, then back at Kelly.  "Come closer."
She took a step so the rolling walker was the only thing between her and the elderly man, then leaned her head toward his.
"I know your secret, too," he whispered.

Bravo, Lynette Sowell!  I also enjoyed Mary Gray and Kelly Frost's story lines but felt that they could've been developed a bit more.  In addition, the relationship between Kelly and Tom Pereira was a bit "cheesy" at times...
"I've wanted to do that for a long time," he said.
"I'm glad you did." He worked out, and she could tell.
(Really??)
...but the ending of Tempest's Course was delightful- and that's all I'm going to say about that.  No spoilers here.;)

About the book: Kelly Frost, a textiles conservator, is invited to the Massachusetts coastal town of New Bedford to restore a 150-year-old Mariner's Compass quilt, with one stipulation: she must live and work in Gray House where the quilt is stored. Tom Silva, whose heart seems as hard as the rocky coastline, is the caretaker employed by the mysterious absent owner of Gray House.
Over the long-lit months as Kelly works to restore the quilt, she is drawn out of her self-imposed shell and embraces the family God has given her after her own family failed her. As Kelly reads stories in a journal penned by Mary Gray, she learns there is no transgression beyond God's forgiveness, but the real obstacle is forgiving herself. During her and Tom's journey to grace and love, an unknown force works to keep both of them from discovering a long-buried truth that will change their lives forever.

About the author: Lynette Sowell is the award-winning author of five novels and six novellas for Barbour Publishing with sales topping 250,000. In 2009, Lynette was voted one of the favorite new authors by Heartsong Presents book club readers. Her historical romance, All That Glitters, was a finalist in ACFW's 2010 Carol Awards. When Lynette's not writing, she divides her time between editing medical reports and chasing down news stories for the Copperas Cove Leader-Press. Lynette was born and raised on the Eastern Shore of Maryland, but makes her home on the doorstep of the Texas hill country with her husband and a herd of cats who have them well-trained.
Learn more at: http://www.quiltsoflovebooks.com


Lynette Sowell's Tempest's Course is the newest book in the Quilts of Love line, and Lynette is celebrating with a fun giveaway and joining Vannetta Chapman and Lisa Carter for the Quilts of Love "Christmas Bee" Facebook Party on December 10th!

Enter today by clicking one of the icons below. But hurry, the giveaway ends on December 16th. Winner will be announced on the Quilts of Love Facebook page on December 17th.
But wait! There's more. RSVP for the "Christmas Bee" Facebook Party on December 10th and connect with the authors from the Quilts of Love series, Vannetta Chapman, Lisa Carter, and Lynette Sowell, for an evening of book chat, quilt trivia, and Christmas traditions and gifts, PLUS get an exclusive look at January's Quilts of Love book!


So grab your copies of The Christmas Quilt, Aloha Rose, and Tempest's Course and join Vannetta, Lisa, and Lynette on the evening of December 10th for a chance to connect and make some new friends. (If you haven't read the books, don't let that stop you from coming!)

Don't miss a moment of the fun; RSVP today by clicking JOIN at the event page. Spread the word—tell your friends about the giveaway and party via FACEBOOK or TWITTER. Hope to see you on December 10th!

*I received a copy of this book from Litfuse in exchange for my honest opinion.  No other compensation was given to me.*
Posted by mysteryhistorymom at 6:38 PM