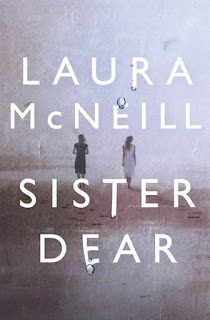 Sister Dear, by Laura McNeill, hooked me from the first page. The book begins with Allie Marshall being released from prison after 10 years. She was convicted of murder but things aren't always as they appear... Returning to Brunswick, GA, Allie anxiously anticipates reconnecting with her daughter, Caroline, and beginning a new life. I soon discovered that parts of Allie's past have yet to be uncovered and the townspeople are not anxious to have her return. Ever. To make matters worse, Allie's only sister, Emma, who's been raising Caroline in her absence, has secrets of her own and a plan to keep things just the way they are.
There are so many reasons that Sister Dear is a great read. The characters are interesting and well developed. Their stories unfold in varying voices alternating between chapters making it difficult to put down! The drama is a compelling puzzle that twists and turns. I wanted to fit all the pieces together in one sitting! The tone is delightfully chilling and keeps the reader guessing as to what will happen next. Perfect for a day in the sun or a night by the fire. I can't wait to read more from this author!

All Allie Marshall wants is a fresh start. But when dark secrets refuse to stay buried, will her chance at a new life be shattered forever?

Convicted of a crime she didn't commit, Allie watched a decade of her life vanish --- time that can never be recovered. Now, out on parole, Allie is determined to clear her name, rebuild her life, and reconnect with the daughter she barely knows.

But Allie's return home shatters the quaint, coastal community of Brunswick, Georgia. Even her own daughter Caroline, now a teenager, bristles at Allie's claims of innocence. Refusing defeat, a stronger, smarter Allie launches a battle for the truth, digging deeply into the past even if it threatens her parole status, personal safety, and the already-fragile bond with family.

As her commitment to finding the truth intensifies, what Allie ultimately uncovers is far worse than she imagined. Her own sister has been hiding a dark secret---one that holds the key to Allie's freedom.

Laura McNeill is a writer, web geek, travel enthusiast, and coffee drinker. In her former life, she was a television news anchor for CBS News affiliates in New York and Alabama. Laura holds a master's degree in journalism from The Ohio State University and is completing a graduate program in interactive technology at the University of Alabama. When she's not writing and doing homework, she enjoys running, yoga, and spending time at the beach. She lives in Mobile, AL with her family.

*This exciting book was given to my by Litfuse in exchange for my honest opinion. No other compensation was received.*


Posted by mysteryhistorymom at 8:35 PM