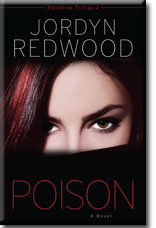 A murdered psychiatrist, an abandoned baby, a missing sister, and a horrifying case of murder.  Poison delivers a chilling rush of an adventure!  It's not for the faint of heart, though.  In fact, I almost didn't make it through some of the flashback sequences as the trauma was quite intense!  The story line is quite compelling, though, as there are so many unanswered questions.  Where is Raven and why did she abandon her baby?  Who is Lucent?  Is he real??  Why did Keelyn's step father murder her siblings?  Who is the friend that can't be trusted??  Hynosis, the art of interpreting body language, and even deadly spiders are in the pages of this sinister book.

I read Poison in one day.  The Nancy Drew part of me wouldn't let me stop until I had answers.  If you like action, mystery and drama you'll find it all- and more- in this book.  Poison is the second book in this series but you can easily read this one on it's own. I bet you'll find yourself looking for the first book in the series once you're done.:)  (It's called Proof, by the way.)  This book is chilling in a "Silence of the Lambs" kind of way.  Things don't "just happen" in the story.   The past is where answers can be found and psychology plays a large part in discovering the "whys".    It's quite a web of  intrigue!  Don't be surprised if you find yourself reading until late in the night, like I did.

Five years ago, Keelyn Samuels's armed, mentally ill stepfather took her family hostage in their house in rural Colorado. She and her half-sister Raven made it out alive, but others did not. Authorities blamed the father's frequent hallucinations about a being named Lucent, but in the end, even the best of the FBI's hostage negotiators failed to overcome the man's delusions and end the standoff peacefully.
SWAT team member Lee Watson was there that day. He watched it all unfold and was able to pull Keelyn and Raven from the grip of their demon-possessed father. Though partially successful, his team had still failed, and the outcome of that day--and that tortured family-has continued to plague Lee ever since. Though unusual for SWAT to reconnect with survivors, Lee bumped into Keelyn two years after the crisis, and they both found some peace in their budding relationship. But peace is hard to maintain when the memory returns . . . in the flesh.
Lucent is back, and he's no hallucination. In fact, he is a very real person with dangerous motives. He has kidnapped Raven's daughter, and--Keelyn worries--maybe has hurt Raven as well. Though she is estranged from her sister, Keelyn feels the immediate need to find Raven and save what family she has left. But when others who were involved in that fateful day start dying, some by mysterious circumstances, Keelyn wonders if she and Lee can emerge unscathed a second time.
The highly anticipated second installment of the Bloodline Trilogy explores the boundaries of faith and family and what happens when both are put to the test.

*I was given a copy of this book from Kregel Publications in exchange for my honest opinion.  No other compensation was received.*


Posted by mysteryhistorymom at 11:35 PM