why i love not camping

I loved being a Girl Scout.

#1- I liked selling cookies.  Didn't I? Now that I think about it...  I was too shy to go door to door.  Yes, that was allowed in the dark ages.  My Dad actually sold them for me at work.
#2- I did make lots of nice friends.  Right?  Wellll...  Most of the girls whispered about me and giggled at my clothes.  I wore Calvins before Brooke Shields so... they thought my name was Calvin.  Truth.
#3- Sewing was super fun.  Hmmm... It's taken me 30+ years to get up enough nerve to attempt it after that puppet patch fiasco.  So, I guess that's a negative.  (Check out the mad sewing skills on the sash below.  I think that was my mom so I come by it naturally.)

I did love earning patches, though.
I truly did. 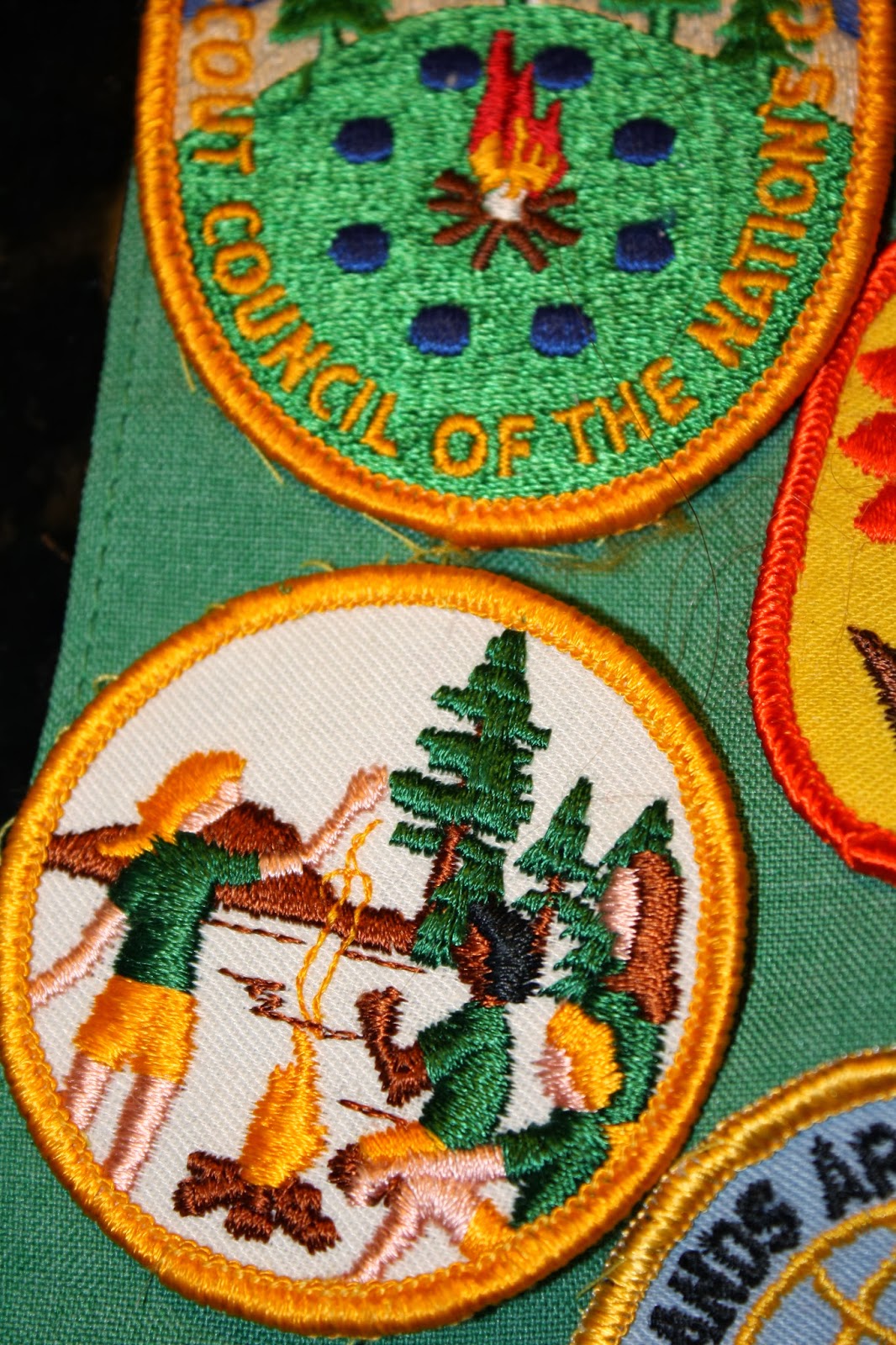 Except the dreaded CAMPING patch. 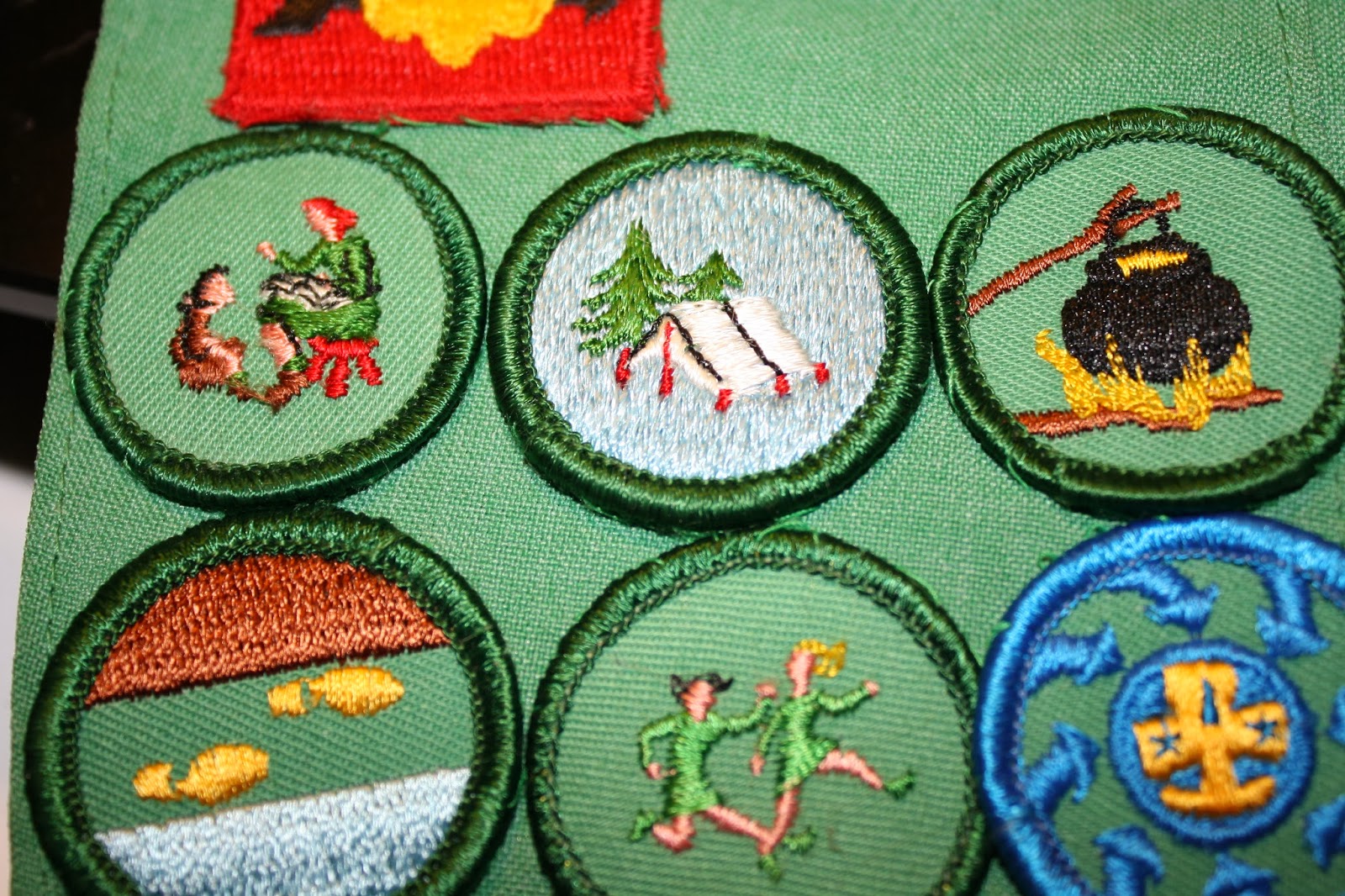 To this day I can't figure out why anyone would ever go camping- by choice?

I earned the above patches, alright.  I even camped more than once.  My parents thought it was a good idea.  For some reason we never went camping as a family??

And this is what I learned...

#1- It's possible to hold your bladder for an entire weekend.  One whiff of that hole in the ground and I was in survival mode.  Don't get me started on the size of the spiders...
#2- If you don't bring a change of clothes for each day of camping you'll end up in a sleeping bag buck naked with 2 other girls.  Has this ever happened to you?  Me neither, but the leaders gave our troop a helpful heads up.
#3- If there's any poison ivy around- even just the scent of it floating in the breeze- it will find me.  Tube socks and calamine lotion for weeks.  Every time.
#4- If you're the first girl in the troop to wear a bra your best friend will tell everyone.  Then, when you least expect it, they'll stop by to take a peek.  All. of. them.  Thanks, Jennifer.
#5- If you're thirsty in the middle of the night and you ask someone to spit in your mouth- they won't do it.  Still not sure if I dreamed this or it really happened.  I think I was a bit delirious from holding my bladder so long.
#6- Washing your hands with a bar of soap inside a pair of nylons and a milk carton that trickled water from holes in the cap was useless.  Where was the running water??

It was like an episode of Survivor- without the million dollar prize.  But hey, I survived.  And I have the pictures to prove it.
Posted by mysteryhistorymom at 12:42 AM

You totally made me laugh here! I definitely remember some camping experiences... one in Montana with the grizzlies, when our guides dug a pot a long ways off from the tents.... Definitely not a walk for the middle of the night.

So funny! I was a Camp Fire Girl, and my summer camp experience was highlighted by bit bugs and spiders in the bath house, little bugs and spiders in the sand (probably why we only had to spend one night on the beach of beautiful Lake Michigan!), and a girl named Enid who wasn't especially nice to any of us (threatened to tell the counselor all kinds of things). Your story brought back lots of memories! The camp was demolished some years ago. There are now condos on those hills. (Holland Michigan, right near the lighthouse, is undoubtedly still a beautiful spot, camp or no camp.)

hahahahaahaha..oh goodness! I LOVED being a girl scout! We went to the girl scout camp and stayed in little cabins...and had a shower house! The bathrooms weren't the best..but not too bad!

My parents and brother are obessed with camping!!! I am just fine going to roast some hot dogs and come home..lol..no need to sleep in a box in the middle of the woods..hahaha.

This is so funny and true! I remember those Girl Scout camp-outs well. And we camped a lot when I was growing up and then with our children. I do remember having my two-year old almost potty trained and holding her over the pit toilet at a campground waiting for her to go. Can't believe I did that!! Needless to say, she was back in diapers for the rest of the summer!

Hi Lori, this post made me giggle. You camped more than once? However did your parents get you to go more times after the first camp? Luckily we never camped as a family and even though I was in the Brownies there was never an open air camp to go to. I wonder why people would camp by choice too. I know you prefer 'camping' at Disney Wilderness Lodge like we do, now that's more like it! hahaha. Lindsay x

Agreed! I loathe camping in all its forms. I don't even sleep well in a hotel room. Ugh! I recall only one GS camping trip. The latrines, oh yes, and the very-scary ghost stories in the dark are the only things I remember. I did not inflict this on my daughters! Each one asked for exactly one year of GS, and that was IT!

Thank you for stopping by my blog, sound like you and I have a lot in common....we are Maxinistas! I enjoyed reading through your blog and hope to be back soon!
Teresa
www.foxhollowstudio.com