The Vicar's Wife by Katharine Swartz 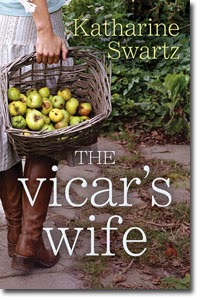 Jane Hatton is quite content living in New York City.  She has a fulfilling career, lots of friends, and the convenience of a Starbucks on every corner.  Life appears to be going well until her 14 year old daughter is suspended from school and Jane's husband, originally from England, feels the need to make some changes for their family.  He wants to move back to England and into an old vicarage located on Britain's Cumbrian coast.  Isolation, cold weather, bleating sheep and instant coffee are what Jane discovers at the end of their journey.  Not a bright beginning to her new life.  However, the discovery of a very old, handwritten list in her new home comforts Jane.  It makes her feel not quite so alone and she's determined to uncover the identity of the list writer.  All the while, her family is beginning to fall apart...

My heart went out to Jane Hatton.  The idea of moving to England into an old vicarage sounds charming but, when all is said and done, I'd terribly miss the life that I know.  And no Starbucks? Now that's just plain wrong.  Anyway, Jane's husband was a kind character and meant no harm, but I still felt badly for Jane.  I felt badly for Andrew, her husband, too.  It wasn't easy reading their struggle, but it was very real and they both had good intentions amid extreme circumstances.  Throw in a teenage daughter with a terrible attitude and a son with newly diagnosed learning disabilities and you have the perfect storm.  Talk about stress.  Onto the mysterious list writer...

I was utterly and completely charmed by Alice and David.  I saw so much of myself in Alice!  She was blessed with a loving husband but had such a problem with doubting herself.  Alice and David also live in the vicarage but decades before Jane and Andrew become owners.  They are the dearest couple with such a tender love for each other...

"I've been waiting for this moment for six months," David told her as they started down the road, and Alice turned to him in surprise.
"Which moment?"
"Seeing you again," he said simply, and her heart swelled ridiculously.  She knew then it didn't matter how happy or eager she seemed to David, for, wonderfully, miraculously, he surely felt the same.

The experiences of Jane and Alice are quite similar.  Rotating from present to past, The Vicar's Wife shares their stories.  I truly enjoyed the beginning of the book, meeting the cast of characters and uncovering their strengths and weaknesses as well as loves and hates.  Along the way, the story became a bit too heavy for my liking, though.  The lighthearted moments became less frequent and the trials were drawn out.  All in all, a unique story with interesting people dealing with life in the best way they know how.

A powerful drama of domestic life following two memorable women who shared a house eighty years apart A New Yorker all her life, Jane Hatton loved her job as the head of a charity championing women's rights, but her fourteen year- old daughter, Natalie, had fallen in with the wrong crowd at her Manhattan school. So Jane and her British husband, Andrew, have decided to move their family to the English countryside. The Hattons have bought the large old vicarage in a small village on the Cumbrian coast, near Andrea's new job. The silence and solitude of a remote village is quite a change. Natalie hates her new school, and eleven-year-old Ben struggles academically. Only seven-year-old Merrie enjoys country life. Has Jane made a horrible mistake? What of her career? Her own identity? Putting on a brave face for the family, Jane tackles renovating the rambling, drafty old house. When she finds a scrap of a very old shopping list, she grows curious about Alice, the vicar's wife who lived there years before. As the twin narratives unfolds--of Jane in the present and Alice in the 1930's--we discover that both are on a journey to discover their true selves, and to address their deepest fears.

* I was given a copy of this book from Kregel in exchange for my honest opinion.  No other compensation was received.*
Posted by mysteryhistorymom at 1:15 AM

Looks like a great book, and will keep it on my to read list. No starbucks???? No barnes and noble??? Don't think so..... People often ask me if I will retire at my cabin... it is a beautiful place but has the same problem