Secrets She Kept by Cathy Gohlke- I saved the best of 2015 for last! 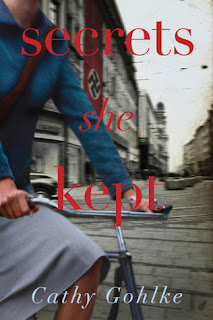 I've saved the best of 2015 for last. I had no idea it would be the best book of the year- but it's truly going to be hard to top this story. Secrets She Kept, by Cathy Gohlke, is an exceptionally thrilling story that I couldn't put down. I read until I was exhausted and couldn't keep my eyes open any longer. It begins in the 1970's with Hannah Sterling whose mother has recently passed away- and with her so many questions of the past remain unanswered. Why was her mother so distant and cold? Why did she hate Hannah's father? Secret letters come to light and Hannah travels to Germany to pursue the answers she seeks. What she discovers may free her or destroy her.

Go on a journey of your own to WWII with beautiful, young Lieselotte (Hannah's mother).  Her father and brother have high hopes for Germany and actively participate in the Nazi party while Lieselotte begins a secret life of aiding hidden Jews.  Hitler demands full participation in the Reich and this includes all members of the family. Lieselotte nears the age of marriage and life becomes very frightening as her heart belongs to a young man that her father does not approve of...

Cathy Gohlke does a masterful job of leading us through time between WWII and the 70's. My heart ached for both Lieselotte and Hannah as betrayal, love, secrets and lies steal their innocence and cause them to question themselves and those they trust. I absolutely adored how the author incorporates Corrie and Betsie Ten Boom into the story. They introduce the beautiful message of hope and forgiveness that God offers to all of us. You'll be entranced as this story unfolds. Cathy Gohlke always delivers an incredible tale but this is her best so far. I highly, highly recommend!

All her life, Hannah Sterling longed for a close relationship with her estranged mother. Following Lieselotte’s death, Hannah determines to unlock the secrets of her mother’s mysterious past and is shocked to discover a grandfather living in Germany.
Thirty years earlier, Lieselotte’s father is quickly ascending the ranks of the Nazi party, and a proper marriage for his daughter could help advance his career. Lieselotte is in love—but her beloved Lukas is far from an ideal match, as he secretly works against the Reich. Yet Lieselotte never imagined how far her father would go to ensure her cooperation.
Both Hannah’s and Lieselotte’s stories unfold as Hannah travels to Germany to meet her grandfather, who is hiding wartimes secrets of his own. Longing for connection, yet shaken by all she uncovers, Hannah must decide if she can atone for her family’s tragic past and how their legacy will shape her future.

*I received a copy of this wonderful book from Tyndale in exchange for my honest opinion. No other compensation was given.*
Posted by mysteryhistorymom at 5:22 PM No comments: 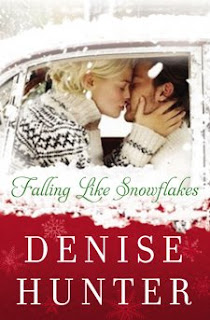 Falling like Snowflakes, by Denise Hunter, is a thrilling romance that will make your heart pound! I fell in love with the cover and couldn't wait to begin reading! Eden, a young mother, and her son are desperately on the run, but why? And from whom? As fate would have it, their car breaks down in the snow filled town of Summer Harbor, Maine, and if matters couldn't get worse, Eden's purse is also stolen and they're left stranded and terrified. Don't despair, dear reader, as there are hunky young men (brothers!) that live in Summer Harbor. They run a Christmas tree farm and have just discovered they need a caretaker for their irritable (but endearing) aunt who's recently injured her leg.😉 See where this is going? But don't even begin to think this story is predictable- not for a second. A dark past haunts Eden that has caused her son to become mute. There's also the tiny issue of our very attractive leading man, Beau, already having a girlfriend. Whoa. All I will tell you is that Falling Like Snowflakes is full of mystery and pulse racing danger (as well as memorable moments under the mistletoe). Tenderness, passion, bravery and humor are all wrapped up in this fabulously romantic book! I absolutely loved it.

When the Christmas season finds Eden in Summer Harbor, Maine, she's on the run from trouble. Romance is the last thing on her mind.
Riding in a bus in the thickly falling snow, Eden Davis wonders how it ever came to this-fleeing under cover of night with young Micah sleeping fitfully in the seat beside her. When a winter storm strands them in Summer Harbor, Maine, Eden wonders if what might have been the end could be a new beginning.
Beau Callahan is a habitual problem-solver. He's recently left his job with the sheriff's department to take over the family Christmas tree farm to save it from insolvency. But he's flummoxed. During the busiest season of the year, he's shorthanded. Then Eden shows up looking for work, and Beau believes he's been rescued. Competent, smart, and beautiful, Eden's also guarded and quiet. He soon figures out she comes with a boatload of secrets. But Beau can't seem to help himself from falling for her.
As Christmas Eve approaches, Beau discovers he'll do anything to keep Eden safe. But who's going to protect his heart from a woman who can't seem to trust again?
About the Author
Denise Hunter is the internationally published bestselling author of more than 20 books, including Dancing with Fireflies and The Convenient Groom. She has won The Holt Medallion Award, The Reader's Choice Award, The Foreword Book of the Year Award, and is a RITA finalist. When Denise isn't orchestrating love lives on the written page, she enjoys traveling with her family, drinking green tea, and playing drums. Denise makes her home in Indiana where she and her husband are raising three boys. You can learn more about Denise through her website DeniseHunterBooks.com or by visiting her FaceBook page at facebook.com/authordenisehunter
*I was given this book by BookLook Bloggers in exchange for my honest opinion. No other compensation was received.*
Posted by mysteryhistorymom at 5:27 PM No comments: