Change of Heart by Courtney Walsh

A cozy guest house, two best friends dealing with broken hearts, secrets uncovered by the FBI, and a busy body (with a big heart) group of women who call themselves the Valentine Volunteers- all in a charming town called Loves Park. Change of Heart, written by Courtney Walsh, is a delightfully romantic escape. I particularly enjoyed the well developed main characters. Trevor Whitney- The handsome, long suffering, and dutiful son who put aside his dreams to continue the family business. There is one dream of his that refuses to be put aside, though. Evelyn Brandt- A breathtakingly beautiful artist who has forgotten her dreams. Personal secrets about her husband have come to light and she's desperate to escape the scrutiny of the public eye. Trevor and Evelyn began as best friends  in high school and the flashbacks to their youth were wonderful. Their story would work well in a movie as there are many memories, conversations, etc. that would convey all on screen. A great cast of supporting characters, as well. Christopher Brandt's "indiscretions" keep the story going at a great clip- Is he the villain or just misunderstood? (You'll have to read to find out!) Maggie Lawson, an attractive reporter with an eye for Trevor Whitney. Is she the love of his life? Aunt Lilian- She knows Trevor so well and exactly when to dole out tough love when necessary.

The story line for Change of Heart was quite enjoyable, although it tended to drag on a bit at the end. If you're looking for a Spring Break or summer beach escape you may just want to tuck it into your tote bag!

A Colorado senator’s wife, Evelyn Brandt seems to have it all. But her carefully constructed life comes toppling down when the FBI crashes her society brunch with news that her husband has been arrested for embezzlement, and he’s far from repentant. It turns out this was only the start of his indiscretions—for which he has little regret.As the weeks following the scandal turn into months, Evelyn withdraws, even shirking her duties with the philanthropic Valentine Volunteers. The inquisitive women of the group are determined not to let Evelyn’s divorce destroy her. They have big plans for her to use her long-forgotten artistic talent to reimagine the city’s iconic lamppost hearts. But doing so will force Evelyn to work closely with Trevor Whitney, her ex-husband’s former best friend. Though she and Trevor used to be close—and he’s been letting her hide in his guesthouse—his gruffness conveys his unease with the situation.Amid the beauty of Trevor’s farm and the comfort of a paintbrush, Evelyn starts to reclaim the dreams she sacrificed to become the perfect politician’s wife. And as creativity inspires them both, Whit begins to see the girl he fell in love with before his friend—and his own mistakes—stole his chance. Possibilities for a new beginning emerge, but long-kept secrets threaten to ruin everything. After so much time, is a change of heart too much to hope for?

Read the 1st Chapter of Change of Heart here!

*I was given a copy of this book by Tyndale in exchange for my honest opinion. No other compensation was received.*
Posted by mysteryhistorymom at 11:57 PM No comments: 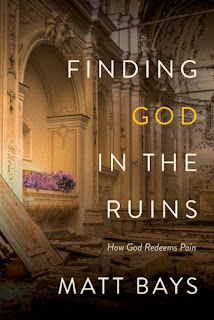 Finding God in the Ruins, written by Matt Bays, is an incredibly honest and powerful account of how God can be found in the midst of pain, loss, desperation and hopelessness. I truly believe this book could save your life. So many of us struggle in silence, barely making it through the day. Please don't give up! This book will ease your pain and show you that God is with us- in the good times and bad. (PM me if you need to talk. I'll be happy to send you my copy of this book.) Through Matt's personal struggles and suffering (he has had more than his share) he shares the journey he walked to find peace- and God was waiting there. "Healing has no map; every person's experience is different."

Scattered throughout this book are personal stories of pain and anguish. Abuse, tragedy, illness, depression, betrayal, alcoholism, cancer, self injury, cancer, sexual slavery, a nameless woe and more. This book is hardcore- and very much needed by so many. Matt Bays doesn't candy coat a word. Thank you, Matt. Looking the other way, covering things up, and/or pretending everything is just fine doesn't help a bit. Knowing God is on your side and that others have experienced your pain is conducive to healing and redemption. Hope exists and is there for the taking, friends. It's during the hard times that God shines His brightest!

I form the light and create darkness,  I bring prosperity and create disaster,  I, the Lord, do all these things.  Isaiah 45:7

God has promised that along with prosperity, "we will have trouble in this life". Through our troubles we can deliver hope to others. We can be survivors and help others to do the same. In the midst of pain, frustration or unmet expectations you may want to ask the Lord, "What is it that you want me to learn so that I can accomplish your will for my life?" I plan to do exactly the same thing.

If God is love, why do we hurt so much?

When the reality of your pain doesn't line up with what you've been taught in church, then what? While many abandon their faith or embrace hopelessness, it is possible to discover the God who heals your heart in the midst of the pain.

Matt Bays has been where you are. His unforgettable stories of loss and healing will usher you into a life where gratitude overpowers anger, hope overcomes despair, and hunger for God replaces indifference to God. With a fresh and original writing style, Bays demonstrates that true redemption is far more powerful than the temporary fixes of sanitized Christianity.

Matt Bays is a writer, speaker, and musician with a passion to call people out of their hiding places. In ministry for twenty years, he and his wife, Heather, live in Indianapolis with their fun-loving and insightful teenage daughters.

*I was given a copy of this incredible book from Litfuse in exchange for my honest opinion. No other compensation was received.*
Posted by mysteryhistorymom at 3:01 PM 1 comment: