The Alliance by Jolina Petersheim 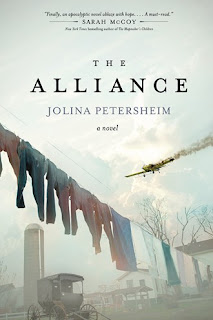 The Alliance, written by Jolina Petersheim, is a thought provoking story of what could happen in an earth shattering, unseen future. The beginning of the book immediately grabs hold of readers when Moses Hughes' plane dramatically crashes into an Old Order Mennonite community after the instruments are destroyed, His accident was mysteriously caused by an electromagnetic pulse which wiped out technology- cars stop running, electricity fails, and telephones ceasing to work are only the beginning. Leora Ebersole, a young independent Mennonite, volunteers to care for Moses' wounds, although she's already responsible for her younger siblings and grandmother. When Moses reveals his concerns to the Mennonite community members it includes plans of guns and protection from the outside world. Chaos will be coming soon, he tells them, and they need to be prepared. What follows is something no one could have ever foreseen.

I enjoyed this unique glimpse into the future with Mennonite and "Englisch" people working together for survival. There is tension, drama and emotion and the feeling of peril is pervasive. The story does tend to drag a bit in portions of the book but overall a good read. The sequel, The Divide, will be released in spring 2017.

When Leora Ebersole sees the small plane crash in her Old Order Mennonite community, she has no idea it’s a foreshadowing of things to come. When the young pilot, Moses Hughes, regains consciousness, they realize his instruments were destroyed by the same power outage that killed the electricity at the community store, where Englischers are stranded with dead cell phones and cars that won’t start.Moses offers a sobering theory, but no one can know how drastically life is about to change. With the only self-sustaining food supply in the region, the Pacifist community is forced to forge an alliance with the handful of stranded Englischers in an effort to protect not only the food but their very lives.In the weeks that follow, Leora, Moses, and the community will be tested as never before, requiring them to make decisions they never thought possible. Whom will they help and whom will they turn away? When the community receives news of a new threat, everyone must decide how far they’re willing to go to protect their beliefs and way of life.

*I was given this book by Tyndale Publishers in exchange for my honest opinion. No other compensation was received.*

Posted by mysteryhistorymom at 12:37 PM