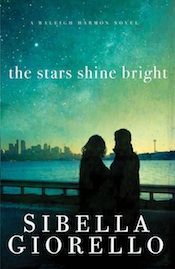 My Thoughts about The Stars Shine Bright:

I took my time and savored each and every page of The Stars Shine Bright. I didn't want to miss a thing!  It takes place in the Pacific Northwest, involves a dangerous undercover assignment, horses dying under mysterious circumstances and a killer that will stop at nothing.  Special Agent Raleigh Harmon assumes the identity of Raleigh David, and in doing so immerses herself in the tangle of characters at Emerald Downs, a thoroughbred horse track.  The Mob, arson, radiation, bombs and mental hospitals all make an appearance in this wild ride!  Raleigh Harmon is clever, driven and committed to her career, to the point that she may miss out on the happiness that she so desperately desires.  Her mother is currently a patient in a mental hospital and refuses to see her and her fiance loves her but just doesn't understand her.  My heart went out to Raleigh and yet I wanted to shake her at the same time.  The Stars Shine Bright will keep you guessing to the end.  Don't be surprised if you find yourself staying up late to read "just a few more pages".:)

More about the book:

After the FBI suspends her for bending its rules, Special Agent Raleigh Harmon is looking for a chance to redeem her career and re-start her life.

Sent undercover to a thoroughbred horse track, Raleigh takes on a double life to find out who’s fixing the races. But when horses start dying and then her own life is threatened, Raleigh realizes something bigger—and more sinister—is ruining Emerald Meadows.

Her one contact with the FBI is Special Agent Jack Stephanson, a guy who seems to jump from antagonistic to genuine friend depending on the time of day. And she can’t turn to her family for support. They’re off-limits while she’s undercover, and her mother isn’t speaking to her anyway, having been confined to a mental hospital following a psychotic breakdown. Adding insult to her isolation, Raleigh’s fiancé wants them to begin their life together—now—precisely when she’s been ordered not to be herself.

With just days left before the season ends, Raleigh races to stop the killing and find out who’s behind the track’s trouble, all the while trying to determine if Jack is friend or foe, and whether marrying her fiancé will make things better—or worse.

Raleigh is walking through the darkest night she’s faced, searching for a place where the stars shine bright. 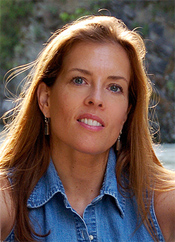 Sibella Giorello grew up in the mountains of Alaska admiring the beauty and nature that surrounded her. She majored in geology at Mount Holyoke College in Massachusetts hoping to learn more about the landscape she loved back home. From there Sibella followed a winding path, much like the motorcycle ride she took across the country, which led to her true love, journalism.

She found herself in Seattle writing for rock-n-roll magazine and earned a journalism degree from the University of Washington before heading south to the land of great stories.

In Virginia, Sibella became a features writer for the Richmond Times-Dispatch. It was there she also met her husband and would hear Jesus whispering her name at a tent revival.

Sibella started writing about Raleigh Harmon as a way to keep her love of story-telling alive while staying at home with her young sons. As a journalist and author, her stories have won state and national awards, including two nominations for the Pulitzer Prize. The Stones Cry Out, the first Raleigh Harmon novel, won a Christy award for debut novel in 2008. Sibella now lives in Washington state with her husband and sons.

Novelist Sibella Giorello is celebrating the release of the new book in her praiseworthy Raleigh Harmon series by giving away a Kindle Fire! 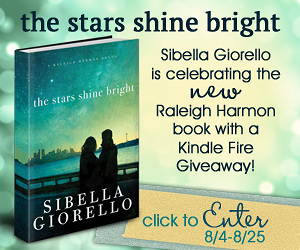 One grand prize winner will receive:
• A brand new Kindle Fire
• The entire 5-book Raleigh Harmon series.
Hurry, the giveaway ends on 8/25/12. The winner will be announced on 8/27/12 on Sibella's blog!

Posted by mysteryhistorymom at 12:31 PM