What is the deal with Henry? 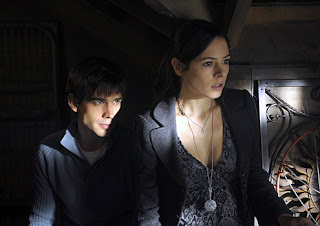 Harper's Island.  I love this show!  I'm almost giddy when Saturday night rolls around!  I think that Henry is looking very suspicious.  Why is he trying to get his brother arrested?  Is he hiding something?  And what happened with him the other night??  Of course, when they make someone look suspicious, they never are...  Is Abby's Dad still alive?  Is the ferry coming back to get them off the island?  What are your thoughts?  Missy?  Amy??
Posted by mysteryhistorymom at 11:04 AM

OMGoodness...you love this show too! I do to! But the sad thing it will be cancelled....you know I am at lost now after this past weekend...Since I was out of town I watched it this afternoon during lunch and was shocked....this is really a great mystery and I actually am lost about who is doing this...could Abbe be doing this...or Jimmy? We shall see.

Henry, Henry, Henry, What are we to do about you? I have NO idea because I didn't start watching this show! Sounds like you are enjoying it though! :)

Hey, I posted about your giveaway and put a fun Twilight Trivia game on my blog!

I've never even heard of Harper's Island! Where have I been living? LOL!

I had actually planned on watching that series but then forgot! Now I won't start b/c I feel that I've missed too much. Sounds good!

I think I missed a couple of episodes after it moved to Sat. night. I need to go back and watch!

Did he kill his brother?!

I just finished watching the episode from Saterday...
Henry DID say that if he was face to face with his brother he would kill him. hmm... was Henry killing or trying to save the poor misguided lad? I can't figure out who the real killer is. I still think it might be Abby's boyfriend.

Dean and I watched the first one, but haven't since. We thought it wasn't on anymore. Guess we'll have to hulu it. Hope you are having a great week!

is that what happened to it? I was wondering when I didn't see it on thursdays anymore!
can you email me about the nancy drew swap? I have deleted EVERYTHING on my email and I need to contact Molly. I am sooo late mailing and have lost her address. I do have everything ready to go, but no place to send it!
grammatrish@ca.rr.com

I love this show! All the sudden it was gone and I was sooo sad. But we looked it up and all the episodes were online so we are finally caught up and now I know it is on a different note. This last one got me so confused...I don't understand the "its all bout you"....I think through the whole show I think it is someone new at least 3 times. I believe we have 3 or 4 more episodes before we find out the who's and why's.

I'm so confused after the last episode. (I watch it online, too. It's a great way to catch up! But you have to get past the first episode, which is poorly written/acted and altogether cheesy. But then it grows on you and gets good!) Lori, you know my theory. But now my question is: what's up with the feeble Brit and his bimbo girlfriend? Are they there for comic relief, or do they serve a more significant purpose and their personas are meant to throw us off? All the other couples have been picked off...