Distortion by Terri Blackstock- Everyone Has Secrets... 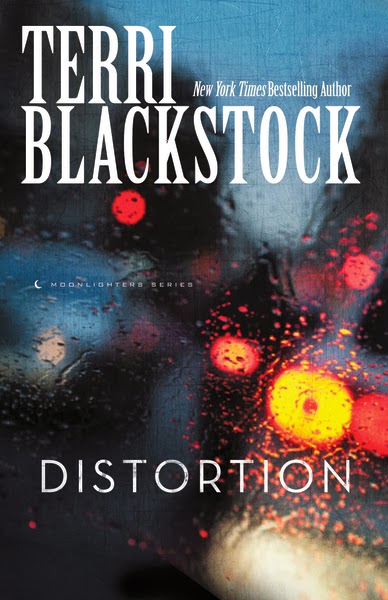 Pulse pounding, raw and filled with a twisted web of secrets, Distortion is proof that Christian fiction can deliver a powerful punch- and still have a focus on the Lord. It's Terri Blackstock's newest release from her Moonlighter series.  A highly respected doctor is murdered, his family is utterly devasted and then... things get really bad.

"Bob, we're getting impatient with you."  The male voice was unfamiliar, deep, raspy.  "You're putting yourself in danger.  But we won't stop with you.  We can make an example of your children, too."

The phone message unleashes an avalanche of questions and Bob's wife, Juliet Cole, is determined to discover the answers in order to keep her family safe.  After fifteen years of marriage, she comes to realize that her husband is not at all who she thought he was.  Now she may have to pay for his dirty little secrets.

Juliet Cole and her siblings are incredibly strong characters with a tremendous love for each other.  Watching them work together kept the story moving with a bit of hope, when all seemed to be lost.  I'd cast Julianne Moore as Juliet- gorgeous and extremely tough when it counts. I also loved hating the cunning villainess, Amber Williams.  She's a Pamela Anderson type, with dangerous desperation.

Terri Blackstock engages her readers and delights them with a suspenseful trail of bread crumbs.  Don't pick Distortion up at bedtime unless you're prepared for a sleepless night. You won't be able to put it down.:)

About the book: Juliet Cole's life has been dismantled by the murder of her husband. She doesn't know who---or what---to trust when everything she has believed to be true about her marriage has been a lie.

A husband's lies can have deadly consequences.
When Juliet Cole's husband of fifteen years is murdered before her eyes, she thinks it was a random shooting. Devastated and traumatized, she answers hours of questioning, then returns home to break the tragic news to her boys. But a threatening voicemail takes this from a random shooting to a planned, deliberate attack.
Juliet realizes that she and her children are in danger too, unless she meets the killers' demands. But as she and her sisters untangle the clues, her husband's dark secrets come to light. The more she learns, the more of her life is dismantled. Was her husband an innocent victim or a hardened criminal?

About the Author: Terri Blackstock has sold over six million books worldwide and is a New York Times bestselling author. She is the award-winning author ofIntervention, Vicious Cycle, andDownfall, as well as such series as Cape Refuge, Newpointe 911, the SunCoast Chronicles, Restoration, and Moonlighters.

Learn more about Terri at: http://terriblackstockbooks.com


The book releases March 11th, and Terri will be kicking off the release with a fun Facebook Distortion party and giving away a Kindle Fire HDX. PLUS readers can pre-order the ebook for just $4.99 between now and 3/11 everywhere ebooks are sold.


Enter today by clicking one of the icons below. But hurry, the giveaway ends on March 11th. Winner will be announced at the Distortion Facebook Party on March 11th. Connect with Terri for a "suspenseful" book launch party with prizes, a book chat, and more.

Don't miss a moment of the fun; RSVP today by clicking JOIN on the event page. Tell your friends via FACEBOOK or TWITTER and increase your chances of winning. Hope to see you on the 11th!

*I was given a copy of this book from Litfuse in exchange for my honest opinion.  No other compensation was received.*
Posted by mysteryhistorymom at 12:50 PM

Sounds great, Lori. I enjoy Terri Blackstock, but haven't read anything by her in a while. I also read your review of Friend Me--that one sounds great. Gonna have to make a library run! So glad your husband came through his surgery ok. Blessings, Diana