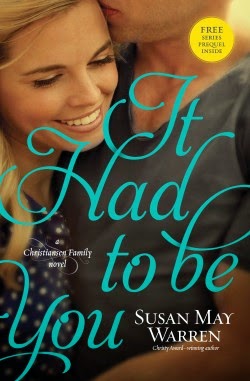 It Had to Be You, by Susan May Warren, is a truly heartfelt story that involves the fate of a precious little girl with a failing heart, the future of two hockey stars, and a fiercely independent young lady with unspoken dreams.  What makes it beautifully memorable is the way the author draws the story back to the Lord, in times of celebration and in trial.  The central theme is one of family and the incredible blessing of having dear ones near when we need them.

I was a bit skeptical of this story as it began with the main character, Eden Christiansen, going on a date with a mortician!  Thank goodness that relationship didn't last long.  You'll have to read what ended it, though- crazy!  Soon after that I was utterly engaged with the story.  Loved it.  Eden lives her life in the shadow of her brother, Owen, a quickly rising hockey star with an incredibly bright future- until tragedy strikes.  I didn't see this coming at all.  The story of Sam and his precious 9 year old daughter, Maddy, is woven into the book in a tenderly engaging way.  Their story is full of sadness yet somehow God is able to shine through it all.  There's also the mystery of the unidentified young man in a coma at the hospital- "John Doe".  Susan May Warren has an amazing ability to make her readers feel for the characters and it's beautiful how she uses their lives to reflect on the Lord.   My favorite character was John Christiansen, Eden's father.  His faith in the Lord took my breath away...

"We expect God's love to be all nice and neatly packaged.  But He'll do what He has to in order to draw us to that place where we need Him.  Know Him.  Are overwhelmed by His love for us."

He got up, ventured over to the food.  Looked in the bag and pulled out to Owen.  "Satan's plan for our suffering is the destruction of our faith.  God's plan is for life.  For love.  You need to make a choice, Owen.  Are you going to pray and lean into God?  Or are you going to let this take you apart?"

So wise.  Definitely words to focus on and learn from.

I highly recommend this book.  It was wonderful!

A Christensen Family Novel.
Eden Christiansen never imagined her role as her younger brother Owen’s cheerleader would keep her on the sidelines of her own life. Sure, it feels good to be needed, but looking after the reckless NHL rookie leaves little time for Eden to focus on her own career. She dreamed of making a name for herself as a reporter, but is stuck writing obits—and starting to fear she doesn’t have the chops to land a major story. If only someone would step up to mentor Owen . . . but she knows better than to expect help from team veteran and bad-boy enforcer Jace Jacobsen.
Jace has built his career on the infamous reputation of his aggressive behavior—on and off the ice. Now at a crossroads about his future in hockey, that reputation has him trapped. And the guilt-trip he’s getting from Eden Christiansen isn’t making things any easier. But when Owen’s carelessness leads to a career-threatening injury and Eden stumbles upon a story that could be her big break, she and Jace are thrown together . . . and begin to wonder if they belong on the same team after all.


Susan May Warren is celebrating the release of her newest Christiansen Family novel, It Had To Be You, with a $100 Visa cash card giveaway and offering readers a free book club kit.


Enter today by clicking one of the icons below. But hurry, the giveaway ends on March 29th. Winner will be announced April 1st on Susan's blog. Also, visit her website to learn more about the It Had To Be You backstory and Susan's free book club kit.

Don't miss a moment of the fun; enter today and be sure to stop by Susan's blog on April 1st to see if you won.

*I was given a copy of this book from Litfuse in exchange for my honest opinion.  No other compensation was received.*
Posted by mysteryhistorymom at 1:37 PM

Sounds like a good read. I just finished a book about a little girl with a failing heart: When Crickets Cry by Charles Martin. It was really good.