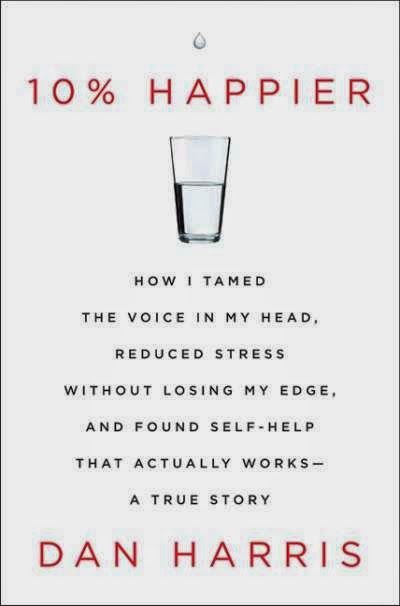 10% Happier, by Dan Harris, is one man's journey to gain control over the negative thoughts and disabling stress in his life.  Through his personal thoughts as well as engaging experiences with celebrities, Dan Harris delivers an honest, and often quite humorous, story.  His road to happiness is quite diverse including drug use, exploring behind the scenes of a mega church, interviewing self-help authors Eckhart Tolle and Deepok Chopra, and eventually escaping on a Buddhist retreat where he discovers the art of meditation.

Dan Harris is a refreshingly honest and cleverly entertaining author.  His story is one we can all relate to in one degree or another.  We all have fears for the future, we all seek to reduce stress and we all want to be happy.  Dan Harris has lead a truly exciting life and I really enjoyed reading about his many adventures. Reporting from Afghanistan, interviewing the Dalai Lama, as well as his life changing panic attack in front of the camera have all shaped him.  His occasional use of "colorful language" throughout the book was a bit off setting to me, though.

10% Happier takes readers on a ride from the outer reaches of neuroscience to the inner sanctum of network news to the bizarre fringes of America’s spiritual scene, and leaves them with a takeaway that could actually change their lives.
After having a nationally televised panic attack on Good Morning America, Dan Harris knew he had to make some changes. A lifelong nonbeliever, he found himself on a bizarre adventure, involving a disgraced pastor, a mysterious self-help guru, and a gaggle of brain scientists. Eventually, Harris realized that the source of his problems was the very thing he always thought was his greatest asset: the incessant, insatiable voice in his head, which had both propelled him through the ranks of a hyper-competitive business and also led him to make the profoundly stupid decisions that provoked his on-air freak-out.
We all have a voice in our head. It’s what has us losing our temper unnecessarily, checking our email compulsively, eating when we’re not hungry, and fixating on the past and the future at the expense of the present. Most of us would assume we’re stuck with this voice – that there’s nothing we can do to rein it in – but Harris stumbled upon an effective way to do just that. It’s a far cry from the miracle cures peddled by the self-help swamis he met; instead, it’s something he always assumed to be either impossible or useless: meditation. After learning about research that suggests meditation can do everything from lower your blood pressure to essentially rewire your brain, Harris took a deep dive into the underreported world of CEOs, scientists, and even marines who are now using it for increased calm, focus, and happiness.

10% Happier by Nightline anchor Dan Harris embarks on an unexpected, hilarious, and deeply skeptical odyssey through the strange worlds of spirituality and self-help and discovers a way to get happier that is truly achievable.

Dan has teamed up with his publisher, Harper Collins, for a Kindle Fire HDX giveaway.


Enter today by clicking one of the icons below. But hurry, the giveaway ends on May 10th. Winner will be announced May 12th on the Litfuse blog. Learn more about the 10% Happier backstory and read an excerpt here.

Don't miss a moment of the fun; enter today and be sure to stop by the Litfuse blog on May 12th to see if you won.

*I was given a copy of this from Litfuse in exchange for my honest opinion.  No other compensation was received.*

Posted by mysteryhistorymom at 5:46 AM

It sounds like an interesting read. Wish I had more time for it as I do enjoy reading a good book. Enjoyed the pictures in your last post. You always visit the neatest places. I think I need to live over there. It's not as intersting over here where I live.
xx Beca

I missed your giveaway here, but I feel confirmed in my belief that sitting with a cup of tea and just staring into space dreaming is a worthwhile activity! Have a good weekend Lori!