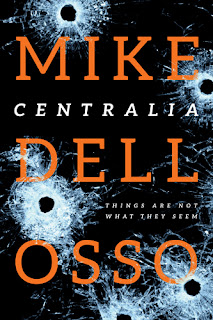 Centralia, by Mike Dell Osso, is a heart-pounding thriller about a man, Peter Ryan, who awakens one morning unable to find his wife and daughter. He's alone in the house. After a phone call to a friend Peter discovers they've been killed in an accident- or have they? A hidden note left by his young daughter leads him to believe otherwise. To add to the confusion, armed men invade his home and all the while memories that don't make sense are attacking his mind. And you thought Monday mornings were bad!

The premise of Centralia is quite intriguing. Peter Ryan is a combination of Liam Niasom in Taken and Harrison Ford in The Fugitive. Clever, capable and obviously trained in defense. Where does this knowledge and ability come from? That remains to be discovered. The story is both a quest to find Peter Ryan's wife and daughter (Are they still alive?) as well as a manhunt to track down Peter Ryan- but who wants to find him and why??

Centralia is an exciting story that hooked me from the first page. I love a good mystery and the pieces of the puzzle that make up this adventure don't fall into place easily. Mike Del Osso slowly teases us along while maintaining a fast paced ride. Dream sequences and obscure memories were a bit excessive but all in all a thrilling adrenalin rush!

Peter Ryan wakes up on a typical morning only to find his house empty, his wife and daughter nowhere to be found. His world is shattered after a phone call to a friend confirms the impossible: his wife and daughter died in a car accident he does not remember. Haunted by faint memories and flashes of details, Peter becomes convinced that something isn’t right and begins to question reality. When he discovers a note in his daughter’s handwriting, strange memories begin to surface that cause him to second-guess nearly everything he once believed. Suddenly armed men show up at Peter’s home, turning the mysterious puzzle of his past into a dangerous game of cat and mouse. On the run and unsure whom to trust, Peter has to discover what’s real and what isn’t . . . before he loses everything. - See more at: http://www.tyndale.com/Centralia/9781414390420#.VbZZlFyxoso

*I was given this book from Tyndale in exchange for my honest opinion. No other compensation was received.*

Posted by mysteryhistorymom at 10:05 AM