Married 'til Monday by Denise Hunter- Your Summer Must Read Romance! 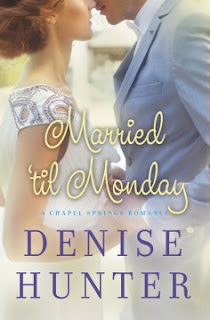 Married 'til Monday is absolutely wonderful. This summer's *must read* romance! A shattered marriage, two broken hearts, and life goes on. Or so it seems. Ryan McKinley (hunky name- Am I wrong?) is still in love with Abby and he intends to pursue her (swooning) until she is back in his arms again. (double swoon) Abby has begun a new life with a new career in a new town and wants Ryan to stay in her past. But a phone call from Abby's Mom changes everything. You see, Abby never told her parents that she was no longer married...

And so the story begins. A road trip in a tiny, "yellow meringue" Fiat. Just Ryan, Abby and little Boo, her dog. A little too close for comfort and an ocean of time for unspoken words. Denise Hunter has a gift for dialogue and creating tension between her characters. Her Chapel Springs series (Dancing with Fireflies, Barefoot Summer, The Wishing Season) including Married 'til Monday has been such a thrill to read as members of the McKinley family find love. But Married 'til Monday just may be my favorite. Maybe. Now that I think about it, while reading them I've had to put each one down from time to time to get my heart rate back to normal. In the words of Martha Stewart, "It's a good thing." ;)

I loved everything about this book. I adored the way Ryan pursued, flirted and at the same time protected Abby. Getting into the minds of both characters allowed the reader to understand Abby and why she is so hard hearted and tough on Ryan. Her backstory is one you won't soon forget- and you'll love her for it. I'm going to let you discover that on your own, but here's a little snippet of Married 'til Monday...

"Life just goes on like this never happened, is that it, Abby?"
"Yes, that's it!"
He turned her face toward him, "Well it did happen. I kissed you and I told you I love you. I spilled my guts. Didn't that mean anything to you?"
Her eyes went blank. "Is this where you call me cold and stone hearted?"
"I said I was sorry!"
She jerked away, anger tightening the corners of her mouth. "Get out of the car, Ryan."
His chest squeezed so tight he couldn't breathe. "Come on, Abby."  The ache in his throat choked off his words.
"Get out." She turned away, looked out the passenger window, her hair a curtain over her face.
His heart beat up in his throat, his pulse beating erratically. She frustrated him, she made him angry. But he still loved her. And he couldn't make her love him, not if she didn't want to.
"I'm not the same man who let you walk away before. I'll give you time, but it's not over, Abby. Not by a long shot."

Download a sample on amazon today or run out and grab a copy of this book at Barnes & Noble.  It's absolutely wonderful and you'll likely finish it in a weekend like I did. You won't be able to put it down, unless you're letting your heartbeat stabilize or need to fan yourself to recover from the passionate banter. Married 'til Monday is summer romance at it's best. Thank you, Denise Hunter!

With a big anniversary party in the works for her parents, Ryan will pretend to be Abby's husband for just one last weekend.
Ryan McKinley has tried to move on from his ex-wife, Abby. He's sulked, he's gotten angry, and ultimately he bought her dream house. Big mistake. Living alone in the massive 2-story has only made him miss her more. When her parents call him out of the blue about their anniversary party in Summer Harbor, Maine, Ryan believes God has dropped a golden opportunity straight in his lap.
Abby McKinley never exactly told her parents about the divorce. A strained relationship with her dad has culminated in a distant relationship with her parents, but she's finally succumbed to her mom's pressure to make the drive for their 35th-anniversary party.
Then Ryan shows up on her doorstep, looking as devastatingly handsome as ever. When he insists he's going to Seabrook, with or without her, Abby knows she can't say no. Her parents still think they're married and now Ryan knows it too. Besides, he only wants to check in with his best friend from college-her cousin Beau, who just lost his dad. It's just a one-week road-trip with the man who broke her heart. What could possibly go wrong?
About the Author
Bestselling novelist Denise Hunter has received the Holt Medallion Award, Reader's Choice Award, Foreword Book of the Year Award, and is a RITA finalist. She lives in Indiana with her husband and their three sons. Twitter: @deniseahunter Facebook: authordenisehunter
*I received this fabulous book from Lookbook Bloggers in exchange for my honest opinion. No other compensation was given.*
Posted by mysteryhistorymom at 11:55 AM