Evelyn Barrett wants to die. As long as her daughter's murderer dies with her, she is ready to go. Why did this man--this stranger--destroy her family? Why has he not been brought to justice? Why is she forced to live a life of anger and grief? Amid a million questions she cannot answer, Evelyn knows one thing for sure: this murderer must be punished for his crime.
Before it all, she was a successful attorney who won all the hard cases. Now that the case is personal, Evelyn will stop at nothing to seek her own version of justice. When another girl goes missing, Evelyn plows forward, ignoring the warnings from police detectives, the pleas of her grief-stricken husband, and the strange, almost supernatural tingles that tug at her. But as she follows the stench of evil, Evelyn learns that the hardest thing she will have to face may not be the death of her child after all. Perhaps the harder lesson is this: the ultimate truth--of crime and verdict, of life and death--cannot be swayed by a mother's revenge.
In this first book of a new, page-turning series, a woman will be brought to her limits before she finally recognizes the movement of the Holy Spirit and reconnects with the source of true peace. 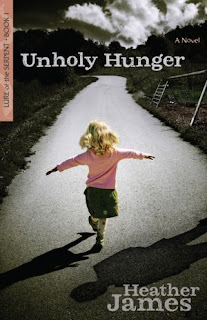 Unholy Hunger (Lure of the Serpent Book 1) is unsettling, intriguing and honest.  It brings to light the raw anger and intense sorrow felt when a child is abducted and murdered.  The book is extremely well written and Heather James does a thorough job of keeping her audience in suspense.  Evelyn Barrett, the main character, is thrown into a nightmare when she discovers that her daughter has been killed by an unknown pedophile.  Her life now exists only to find the killer and revenge her little girl.  To add to this, Evelyn has developed a extraordinary sense of smell that allows her to "locate" predators by their "stench of evil"-  pedophiles, child abusers, etc.  Trying to make some sense out of these horrid acts of violence, Evelyn is forced to look to God.  What she finds gives her pause but is it enough to stop her from becoming a criminal herself?

Unholy Hunger is a tough read as the subject of child murder is not one that I usually seek out.  Heather James does provide us with a very strong, although broken, heroine who carries the story line and subject matter quite well.  Evelyn Barrett is the kind of person I want on my side when the going gets tough! It was difficult watching her self destruct while struggling through the pain, though.  As I stated, the book is unsettling and quite raw but the story is compelling and you'll find it hard to put down.  In a way it seeks to discover the answers that we all want to know.  Why is their evil in the world?  Why do bad things happen?

*I was given a copy of this book from Kregel Publications in exchange for my honest opinion.  No other compensation was received.*
Posted by mysteryhistorymom at 7:41 PM

I had a hard time reading "The Lovely Bones" anything with children and animals.......but looks interesting. Justice in the end????

Sounds very intense. I don't know if I could read it. I might not let Anna out of the house ever again!!

Maybe because of the legal issues and my background, I will look for this book and read it.

Maybe because of the legal issues and my background, I will look for this and read it.