Hunt for the Devil's Dragon by Marianne Hering (The Imagination Station) 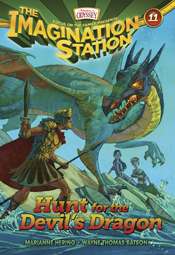 My 10 year old read Hunt for the Devil's Dragon to me.  She loved it!  In fact, as soon as she finished it, we went right to the library and requested more books from this series.  I enjoyed the story line, as well,  because it was pulse pounding (children being sacrificed to a dragon to save the town!) but also contained a message (finding courage to help others that are being bullied).  It begins and ends at Whit's End but what happens in between is thrilling and even a bit scary at times.  Perfect for keeping children's (and adult's!) attention!  The Imagination Station series is a bit like Magic Treehouse books in that there is mysterious travel to exotic and sometimes historical locations.  My daughter prefers the Imagination Station books as she feels that the main characters are "more fun and exciting" than the ones in Magic Treehouse books.  In fact, I had to give her Magic Treehouse books away last year with many of them unread!  I thought she had just outgrown them and yet she can't get enough of the Imagination Station books.  I know what she'll be reading this summer!

Oh, another thing my daughter really liked about Hunt for the Devil's Dragon was the end of the book. The story was really enjoyable but there was more!  At the back of the book there was a secret word puzzle.  Once she solved it, she went to TheImaginationStation.com and claimed her prize!  I won't tell you what it is as I hate to ruin surprises.  Read this book and see for yourself. ;)

If you’re brave, follow cousins Beth and Patrick to Libya in the 13th century. The town of Silene is being terrorized by a vicious animal that is eating livestock. The townspeople believe it’s a dragon sent by the devil. In order to appease the beast, the people believe they must offer a human sacrifice—a young girl named Sabra. When Beth tries to help Sabra escape, she too is tied up as an offering for the dragon. Meanwhile, Patrick and a new friend named Hazi join Georgius, a Roman knight who is serving in Africa to keep peace. Georgius decides to find the dragon and kill it. Georgius’s plans go awry when Beth and Sabra beg him not to kill the dragon. The girls know the true secret of Silene—the dragon isn’t its worst enemy.

Marianne Hering
Marianne has written for children since 1987 when she joined the editorial staff of Focus on the Family Clubhouse and Clubhouse Jr. magazines. In the 1990s she wrote six children's mystery books and more than 40 Bible phonic readers (with co-author Margaret Wilber) for Cook Communications. Now a general book editor for Focus on the Family, she has turned her passion for children's fiction into developing a series for beginning readers who love adventure.

*I was given a copy of this book from Tyndale Publishers in exchange for my honest opinion.  No other compensation was received.*
Posted by mysteryhistorymom at 10:24 PM