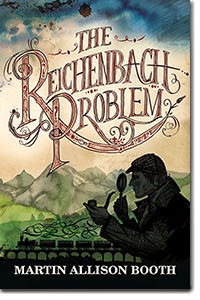 The Reichenbach Problem, written by Martin Allison Booth, is a richly inventive mystery filled with intriguing characters, gorgeous surroundings in the mountains of Switzerland, and a seemingly random acquaintance who evolves into much more than he first appeared to be...

I'll admit that this isn't a light or easy read, and I was a bit intimidated as I ventured through the first pages.  Up for the challenge, I plunged ahead and was soon rewarded for my efforts.  The story beings with Arthur Conan Doyle, eager for solitude and a bit of anonymity, leaving on holiday to Switzerland.     While on the train, a stranger enters his life and Doyle can't seem to get rid of him.  The stranger, Holloway, insists on accompanying Doyle (much to his dismay) on his vacation!  Soon after their arrival, a fellow tourist is discovered dead...

I found Arthur Conan Doyle and Holloway's relationship to be quite entertaining.  Holloway is absolutely incorrigible!  It's almost as if he knows exactly how to get under Doyle's skin and sets out to accomplish that at every opportunity.  Once Peter Brown's body is discovered, Holloway begins to toy with Doyle and the plot begins to quickly thicken.  I also enjoyed meeting the other characters in the book as they were all cleverly created and unique.  Monsieur Plantin, Father Vernon, the lovely Eva and the mysterious Frau von Denecker were a few of my favorites.  The Reichenbach Problem is a book that I enjoyed in small portions as I needed to slowly process the dialogue, situations, circumstances, etc.   This allowed me to really enjoy it's richness, vocabulary, and humor.  I'm a quick reader and occasionally skim through pages, but there was none of that going on here.  The Reichenbach Problem needs to be savored to fully engage it's secrets.  I'm anxious to read the next book in this series!

Arthur Conan Doyle is on the run from his own fame. Taking a much-needed holiday, Doyle escapes to a picturesque village in Switzerland nestled beneath the imposing Reichenbach Falls. There he hopes to find anonymity, but even in this beautiful rural setting, peace eludes him when he finds himself immediately recognized and involved in the investigation of a mysterious death of a fellow traveler.
All too soon, Doyle's somewhat unwilling, gentle probing into the case causes the finger of suspicion to turn towards him. But can the creator of the famous detective actually do the sleuthing himself? As Doyle learns more and more about the famous character he penned, he finds he is less like Sherlock and more like his sidekick, Watson. Can the "sidekick" see enough of the picture to solve the case for once?

*I was given this book by Kregel in exchange for my honest opinion.  No other compensation was received.*
Posted by mysteryhistorymom at 11:35 PM

Sounds like a very interesting read. Of course I like just about anything that includes the word intrigue!!