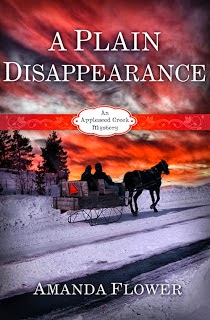 I am SO excited to introduce you to mystery author Amanda Flower!  You've probably heard of her before, perhaps read a few of her books, but I must've been hiding under a rock because this is my first encounter!  Where have I been?!  This lady can rock a mystery- with a delightful smattering of humor, a touch of romance and a suspenseful story line that will keep you guessing until the last chapter.  Oh, and her characters?  You'll definitely love them and love to hate them, if you know what I mean.;)  A Plain Disappearance takes place in the Amish community of Appleseed Creek, Ohio.  A murder has been committed (young Katie Lambright is found buried in the snow on Christmas Eve.) and the Amish and English must work together to catch her killer. It's complicated, as the Amish are known for being very private, but Chief Rose requests the assistance of Chloe Humphrey (AKA: The Amish Whisperer).  Chloe is one tough cookie (with a big heart) when it comes to solving a mystery.  Brave, endearing and persistent, she shows no fear (even when she's quaking in her boots!).  Chloe and Nancy Drew would have been BFF's.

Back to poor Katie.  She was young and oh so pretty. All the young men wanted to court her.  Was the killer a jealous boyfriend or perhaps (gasp!) her own father, who was known to have a terrible temper?  What about Billy Thorpe who has suddenly disappeared??

I wouldn't even think of telling you.  That would be cruel.

You see, since I'm your friend, I'm going to let you find out for yourself in the most wonderful way.  You'll just have to read it.  Yep.  (That's what friends are for.)  A Plain Disappearance is the perfect book to snuggle up with as the fall weather descends.  Go ahead and get out your coziest blanket, brew up a pot of tea and indulge in some homemade chocolate chip cookies.  You're going to be busy for awhile.:)  When you're done, I'll bet you'll put A Plain Death and A Plain Scandal on your Christmas wish list.

A Plain Scandal, A Plain Death, A Plain Disappearance
It's Christmastime in Amish Country, and Chloe Humphrey has begun settling into her life in Appleseed Creek excited to see where her new relationship with Timothy Troyer will lead. Unfortunately it leads to murder when the couple discovers the body of Amish teenager Katie Lambright while on their first date.
Near the scene there is evidence that Timothy's friend and auto mechanic Billy Thorpe is involved with the crime. The police reveal Billy is not really who he said he was and has been living the last decade in Knox County under a stolen alias. Now, Chloe and Timothy must find Billy, bring him to justice, or prove his innocence. 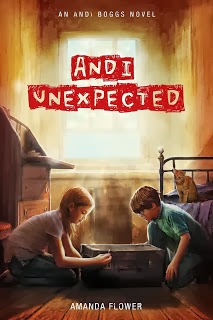 Amanda Flowers writes for children, too!  Andi Unexpected (above) is one that I can't wait for my 10 year old to read.  It sounds awesome.


*I was given a copy of A Plain Disappearance from Handlebar Marketing in exchange for my honest opinion.  No other compensation was received.*
Posted by mysteryhistorymom at 8:22 PM