Glittering Promises by Lisa T. Bergren- The thrilling conclusion of The Grand Tour! 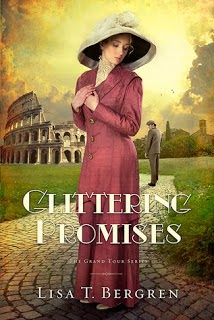 Glittering Promises, the third book in the Grand Tour series by Lisa T. Bergren, is filled with breathtaking beauty, ruthless deception, and all the romance of Europe!  Cora Kensington is quickly becoming the richest woman in the United States, but at what price?  As if that isn't overwhelming enough, two handsome gentleman are desperately competing for her heart.  Pierre de Richelieu- the rich, handsome French prince and William McCabe - the dashing and brave (but penniless) "bear" of her Grand Tour.  The elusive Ethan Hawke is still in the picture, too, having unsuccessfully kidnapped Cora and her younger sister in Grave Consequences.  Cora and her siblings must watch their every step and be wary of whom they trust...

I found the beginning of Glittering Promises to be a bit slow, but it quickly gained momentum.  The love triangle of Cora, Pierre, and Will, was compelling in itself!  I wasn't ever sure who Cora was destined to marry.  But my goodness, the end was an absolute surprise to me!  Through her words, Lisa T. Bergren painted vivid images of Europe on every page.  The history, architecture and stories of the Grand Tour is a delightful education for readers!  Oh, but don't let me forget the passion!  The baths at Saturnia- be still my heart! Will and Cora's interlude at Cascate del Mulino made my pulse race…

About the book: Lisa T. Bergren's popular Grand Tour series concludes as Cora Kensington journeys farther into Italy, wrestles with a terrible ultimatum from her father, and comes to terms with the Father who will never fail her.
America's newest heiress must decide if her potential fortune is rationale enough to give up her freedom and all that God is leading her toward. And when her newly-discovered siblings are threatened with ruin, her quandary deepens. Then as Cora nears Rome, more journalists are tracking the news story of the decade---"Copper Cora," the rags-to-riches girl---and want to know more about her family and the men vying for her attention. Meanwhile, a charming Italian countess decides that if Cora isn't going to claim Will's heart, she might just try . . .

About the author: Lisa T. Bergren is the award-winning author of over thirty-five books, with more than 2 million copies sold. A former publishing executive, Lisa now divides her time between writing, editing, parenting three children with her husband, Tim, and dreaming of her next trip to Italy. She lives in Colorado Springs.

Lisa T. Bergren is celebrating the release of her new book, Glittering Promises, by giving away a $200 Italian feast from Williams-Sonoma and hosting a fun Facebook party on October 29th.


Enter today by clicking one of the icons below. But hurry, the giveaway ends on October 29th. Winner will be announced at the "Glittering Promises" Facebook Author Chat Party on October 29th. Connect with Lisa for an evening of book chat, European trivia, and prizes, and get an exclusive look Lisa's next book.
So grab your copies of the Grand Tour series and join Lisa on the evening of October 29th for a chance to connect and make some new friends. (If you haven't read the books, don't let that stop you from coming!)

Don't miss a moment of the fun; RSVP today by clicking JOIN at the event page. Spread the word—tell your friends about the giveaway and party via FACEBOOK or TWITTER. Hope to see you on the 29th!

*I was given a copy of this book from Litfuse in exchange for my honest opinion.  No other compensation was received.*

Posted by mysteryhistorymom at 10:21 PM