Anomaly by Krista McGee- This World is Only the Beginning 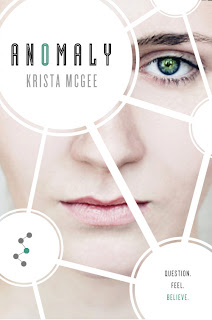 Krista McGee's Anomaly is a chilling look into the future.  Production, perfection, and harmony are the goals without the distraction of emotions, questions and love.  People are now genetically engineered by "The Ten"(a handful of scientists who survived the nuclear war that destroyed the world).  Marriage and love no longer exist.

People that becomes sick or experience emotion are considered anomalies.  They are taken away and never seen again.

Thalli experiences emotion but manages to keep it under control.  But she can only do this for so long.  Once it is discovered that she's an anomaly, her life is in great danger.  With the aid of her friend, Berk (a scientist), Thalli is kept as a test subject, of sorts.  How long can they continue this charade and what does the future hold for Thalli and Berk?

I absolutely loved Anomoly.  The storyline is compelling and incredibly unique.  I normally don't care for sci fi but Anomoly had me in it's clutches on the first page.  Thalli is richly described and beautifully flawed.  Her ability to care for others and trust in this futuristic society is what makes readers adore her.  I fell for both Berk and Stone, although appearances can be deceiving.  The real shining star of Anomoly is the character, John.  John is now in his 90's, yet he remembers the world before the nuclear war.  He also knows the Designer (God) as his savior and teaches Thalli that there is more than "The 10".  Much, much more.  Their world is only the beginning.

*Click HERE to read the first 5 chapters for FREE!*

Thalli has fifteen minutes and twenty-three seconds left to live. The toxic gas that will complete her annihilation is invading her bloodstream. But she is not afraid.
Decades before Thalli’s birth, the world ended in a nuclear war. But life went on deep underground, thanks to a handful of scientists known as The Ten. Since then, they have genetically engineered humans to be free from emotions in the hopes that war won’t threaten their lives again.
But Thalli was born with the ability to feel emotions and a sense of curiosity she can barely contain. She has survived so far thanks to her ability to hide those differences. But Thalli’s secret is discovered when she is overwhelmed by the emotion in an ancient piece of music.
She is quickly scheduled for annihilation, but her childhood friend, Berk, convinces The Ten to postpone her death and study her instead. While in the scientists’ Pod, Thalli and Berk form a dangerous alliance, one strictly forbidden by the constant surveillance in the pods.
As her life ticks away, she hears rumors of someone called the Designer—someone even more powerful than The Ten. What’s more, the parts of her that have always been an anomaly could in fact be part of a much larger plan. And the parts of her that she has always guarded could be the answer she’s been looking for all along.
Thalli must sort out what to believe and who she can trust, before her time runs out…


Krista McGee is celebrating the release of Anomaly, the first book in her new YA dystopian series, with an iPad Mini Giveaway!


Enter today by clicking one of the icons below. But hurry, the giveaway ends on July 31st. Winner will be announced at Krista's website on August 2nd.

Spread the word about Krista and her giveaway HERE!

*I was given a copy of Anomaly by Litfuse Publications in exchange for my honest opinion.  No other compensation was received.*
Posted by mysteryhistorymom at 8:37 AM