Rosemary Cottage by Colleen Coble- Mystery, Murder and a Midwife! 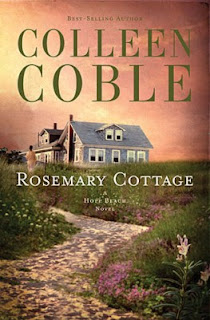 A beautiful island with two unsolved murders is just the beginning of Colleen Coble's Rosemary Cottage!  The second book in her Hope Beach series, it delivers excitement, romance, intrigue AND the wisdom of a midwife?  Only Colleen Coble!  You'll definitely want to bring this book to the beach!  This is why...

#2- The characters are interesting- no cookie cutters here!  Amy Lange is a midwife and shares a wealth of knowledge throughout this book.  (I took notes!)  She even surfs! Curtis Ireland (love the name) is a Coast Guard officer that wears- a do rag!  Jumping out of helicopters is part of his job, you guys.  Sparks fly all through the book with this couple!

#3- Colleen Coble keeps us guessing until the very end!  Following clues contained in a prayer journal, along with a secret code, was a bit like playing Nancy Drew.  Thrilling!

#4- God is the center (and the hero) of the story.  Colleen Coble never loses her focus on the Lord.  She's entertains in every one of her books and yet never fails to give God the glory.

I really enjoyed Rosemary Cottage and revisiting Hope Beach.  The characters introduced in Tidewater Inn were there once again to greet me like old friends.  Amy Lange and Curtis Ireland are an exciting couple, rough edges and all!  Their story isn't an easy one and yet you cheer for them all the way through.  Heather is brilliantly instrumental in "stirring the pot".  I was never able to relax with her around!  And let's not forget Fabio, the wild pony!  He's a whimsical, but crucial, character.  A perfect example of why Colleen Coble is so loved- she never stops surprising her readers.  Thank you, Colleen!

Amy came to Rosemary Cottage to grieve, to heal, maybe even find love. But there's a deadly undertow of secrets around Hope Island . . .
The charming Rosemary Cottage on the beach offers Amy Lange respite she needs to mourn her brother, Ben. She's even thinking of moving her midwife practice to the Outer Banks community. It's always been a refuge for her and her family. She also wants to investigate Ben's disappearance at sea. Everyone blames a surfing accident, but Amy has reason to wonder.
Coast Guard officer Curtis Ireland has lost a sibling too. His sister, Gina, was run down by a boat, leaving him to raise her infant daughter. If anyone knew who little Raine's father was, Curtis could lose his beloved niece. Yet he can't help being drawn to Hope Beach's new midwife, Amy. He even agrees to help her investigate what happened to both Ben and Gina.
Can two grieving people with secrets find healing on beautiful Hope Island? Or will their quest for truth set them at odds with each other . . . and with those who will go to any length to keep hidden things hidden?

Meet Colleen: Best-selling author Colleen Coble's novels have won or finaled in awards ranging from the Best Books of Indiana, ACFW Book of the Year, RWA's RITA, the Holt Medallion, the Daphne du Maurier, National Readers' Choice, and the Booksellers Best. She has nearly 2 million books in print and writes romantic mysteries because she loves to see justice prevail. Colleen is CEO of American Christian Fiction Writers and is a member of Romance Writers of America. She lives with her husband Dave in Indiana.
Learn more about Colleen: http://colleencoble.com/

Water can be calming and healing, but it can also be dangerous, as Amy Lange and Curtis Ireland both found out. Both lost their siblings to the sea, and they hope to find healing on Hope Island. But will they find it, or will their quest to find answers set them at odds with each other and with those who have secrets that need to stay hidden?

Find out in Colleen Coble’s latest book, Rosemary Cottage, which released July 9. To celebrate, Colleen is hosting a 12-day Nautical Summer Giveaway. From July 16-27, Colleen will be giving away a new nautical prize every day. She’ll announce the winners on July 29 on her website, so mark your calendars for that date to see if you were picked as a lucky winner!

Not on Facebook? Enter here.
*I was given a copy of this book by Litfuse Publications in exchange for my honest opinion.  No other compensation was received.*
Posted by mysteryhistorymom at 7:46 AM

I enjoyed reading your take on the book! I loved it. :)