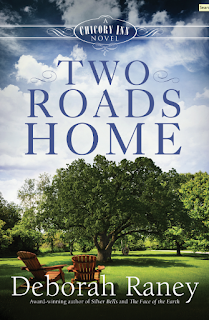 Two Roads Home is the second book in the charming Chicory Inn series by Deborah Raney. It focuses on Corinne and Jesse Pennington (innkeepers Grant and Audrey Whitman's daughter and son-in-law.) Jesse is a handsome and successful businessman and Corinne is happily living her dream to stay home with her young daughters. All seems to be going well until an attractive lady coworker begins flirting with Jesse. Jesse tries to put an end to this and shades of Fatal Attraction wreak havoc on his family, not to mention his career and marriage. When his daughters disappear and a mysterious letter is received, Corinne and Jesse realize that this situation is beyond anything they can handle on their own...

I enjoyed Two Roads Home because it was exciting and suspenseful and yet family was always evident to give it heart. The Whitman family is endearing with their Tuesday night dinner gatherings at Chicory Inn, sister chats and playful banter between Grant and Audrey Whitman. I did feel that the ending was a bit abrupt and thrown together. Too neat and tidy compared to the thrilling build up at the beginning of the story. Looking forward to the next book in the series!

What if it's too late for dreams to come true?

Minor---but-nagging setbacks continue to sour Grant and Audrey Whitman's initiation into the world of innkeeping, but larger challenges brew when an innocent flirtation leads to big trouble for the Whitmans' son-in-law, Jesse. Jesse Pennington's friendly, outgoing personality has always served him well, especially in a career that has earned him and his wife Corinne a very comfortable lifestyle. But Corinne and Jesse are both restless---and for similar reasons, if only they could share those with each other. Instead, too many business trips and trumped-up charges of harassment from a disgruntled coworker threaten their marriage and possibly put their three precious daughters at risk.

With their life in disarray, God is tugging at their hearts to pursue other dreams. Can Corinne and Jesse pick up the pieces of what was once a wonderful life before it all crumbles beneath them?

About the author:
Deborah Raney's books have won numerous awards, including the RITA, National Readers Choice Award, HOLT Medallion, and the Carol Award, and have twice been Christy Award finalists. She and her husband, Ken, recently traded small-town life in Kansas-the setting of many of Deborah's novels-for life in the (relatively) big city of Wichita, where they enjoy gardening, antiquing, movies, and traveling to visit four children and a growing brood of grandchildren who all live much too far away.


*I received this book from Litfuse in exchange for my honest opinion. No other compensation was given.*
Posted by mysteryhistorymom at 10:52 PM